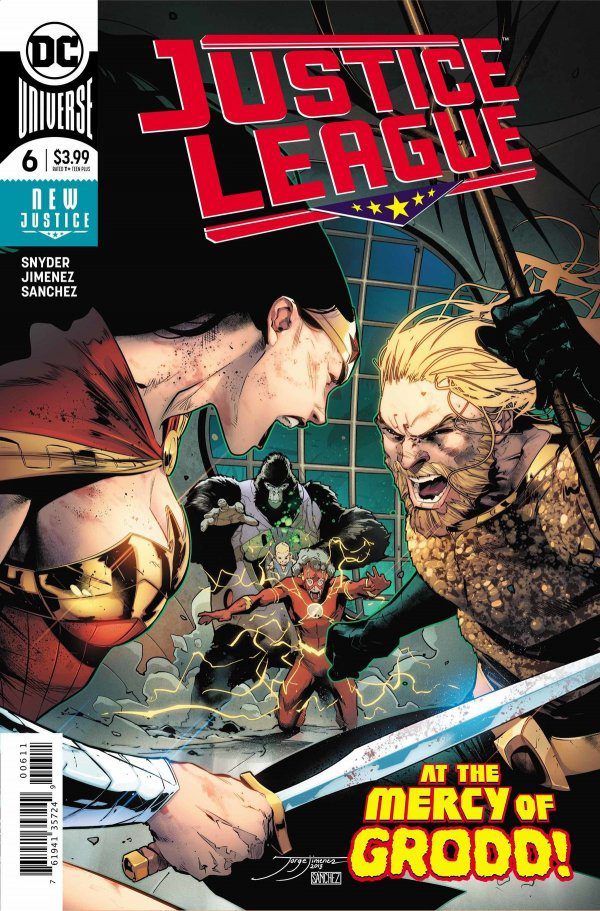 Joker and Luthor are inching closer to seeing Lex’s plan come together. Both are in control of Superman and Martian Manhunter and have gone deeper into the Totality. Lex is savoring his triumph when Batman intervenes and rips Luthor from his ship, battling the villain inside Superman’s body. With Batman starting to get the upper hand, Joker decides to intervene and the situation begins to look dire before Hawkgirl takes on the Joker inside Manhunter.

The situation continues to look grim as John Stewart continues to fight the influence of Sinestro, who is bringing in more people to his corps. Cyborg is trying to keep the defenses at the Hall of Justice working as Flash does his best to fight the Still Force. At the same time, Cheetah and Black Manta discover a power that just might remake the universe itself. The balance of victory in this issue continues to shift back and forth between the teams as the Justice League discovers that the only way that they might be able to win this fight is by doing something they never thought they would ever do as heroes.

Snyder continues to be uniquely adept at telling a massive story with a character based focus. There are some great moments in this issue, especially the Batman reveal and the John Stewart revelation towards the end of the issue. These moments do an awesome job of ramping up the conflict while also rounding out the characters and developing them more. While all of the action was great and I love the mystery that is forming with all of the new twists and turns being created, there are some things that got lost in the shuffle with this issue. The Wonder Woman/ Aquaman battle was never really resolved or even given a conclusion that was alluded to in the story. It just sort of ends and Barry is begging Grodd to stop.

It also looked like this issue was going to focus more on Joker like the previous issue focused on Lex, but that never really played out past the beginning and end of the issue. There are a lot of things happening in this story arc and I applaud Snyder for being able to focus this story the way he has. I just hope that the bigger it gets, more things that grabbed that attention of the reader get resolved.

Phil Jimenez does amazing things with the art in this issue and he does an amazing job of making Joker menacing as well as his takeover of Martian Manhunter scary as hell. Visually, everything in this issue looks amazing and the art does a great job at keeping pace with the narrative.