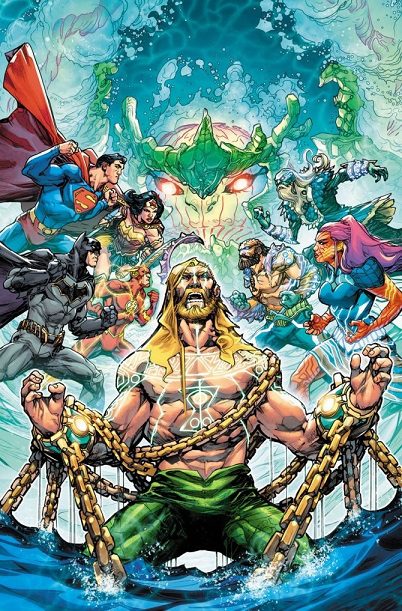 Aquaman is trapped in the Blood Reef, surrounded by the masters of oceans from across the universe. With the Earth flooding from coast to coast and the waters turning humans into monsters, Aquaman tries to plead with his captors to end their assault.

Back on Earth, Batman and the rest of the League do their best to stop the rising waters or, at least, rescue as many people as they can. Batman has to deal with the limitations of his current situation when Gordon becomes a casualty of the waters flooding Gotham. He teams with Miss Martian to try and keep communications open with the rest of the team as Superman encounters one of the invaders and Flash finds himself on a collision course with another.

Everything begins to come to a head when Mera releases Orm and the two of them discover the location of an item that might end the invasion. Unfortunately, the beings holding Arthur are not working alone and his captivity allows for one of his greatest foes to steal Arthur’s greatest gift from him.

Both the story and the stakes in this issue are intense. There is so much happening in this story, Tynion IV does a great job of keeping the story moving at a balanced pace between the character’s personal drama, and the action beats of the invasion. The moments with Batman are some of my favorites because he is struggling both mentally and physically with limitations and the sense of helplessness that he is burying beneath the surface is coming out in different ways that I want to see explored.

Porter’s art does a great job of bringing beauty to the scale of this story. There are a lot of moving pieces in this story and the visuals match the pace and energy of the plot perfectly.