Kiki and the Killbot Review 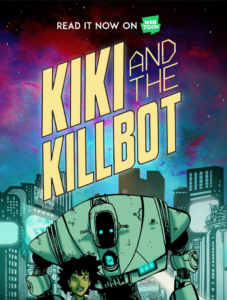 Kiki and the Killbot
Webtoons

Creator Karl Slominski’s Kiki and the Killbot tells the story of a young girl who was stranded on a distant planet. She is a space salvager just trying to make a buck when she makes an unlikely friend in a retired war robot. Throughout their adventures, Kiki and the Killbot and the remaining team of scavengers are hurled across time and space in search of thrilling adventure, excitement, and unexpected danger.

This comic feels like a modern, space adaptation of Iron Giant crossed with the Ravagers from Guardians of the Galaxy. The story very much leans into the “girl and her dog” tropes but adds a lot of fun twists. Kiki is a loveable character that has the curiosity of most young girls her age. She retains her childhood innocence and humor despite being thrust into scary and sometimes violent situations with other scavengers and then by herself.  It’s hard not to smile and giggle at her dialogue. Through the issues currently available we see Kiki blossom into a capable, strong female lead.

The overall aesthetic of the comic takes inspiration from the dirty sci-fi landscapes common in 1970s sci-fi classics such as Star Wars and Alien. In addition, the coloring leans toward darker hues with neon and bright pops mixed in similar to the classic Blade Runner. However, the art is far more fun, stylized and cartoon-like. This is absolutely a book that could be recommended for children.

The comic utilizes a lot of black space in its panels which helps with digital reading but also helps illustrate the desolate vastness of space. The pacing is slightly off but I imagine following the reveal of issue four it will pick up. Currently, the first four issues of the comic are available for free through webtoons.