If you grew up in the 90s, it’s very likely that artist Joel Adams has had played a large part in your life, it’s just a question of whether you’re aware or not. His work has been featured in a multitude of television shows and comics that have been seen world wide, however, like many artists and animators, his name doesn’t always get the billing it deserves. Adams was born into the artists’ life as the son of legendary comic artist Neal Adams (Batman, X-Men, Green Lantern) and quickly made a name for himself in the industry with his work on Ms. Mystic and Bucky O’Hare. As Adams’ reputation grew, so did his portfolio. In 1996 he was tapped by Marvel Animation to do the character design for The Hulk: Animated Series (which I’m sure you all remember fondly). From here the star only rose upward and the art of Joel Adams has been featured in many shows and comics including NASCAR Racers, Captain Scarlet, The Mask animated series, Mighty Morphin Power Rangers, and Harry Potter.

Despite all of the work Adams has done over the years, his most notable work has been on the iconic animated show King of the Hill. Set in the sleepy town of Arlen, Texas, King of the Hill follows a moderately conservative lower-middle class family and their place in the growing cultural landscape across the past two decades. The show has been a cornerstone in animation and culturally relevant sitcoms since 1996, having aired for 13 Seasons (currently the sixth longest running animated show). Along with series creator Mike Judge (Beavis and Butthead, Silicon Valley, Extract) and the influential writer Greg Daniels (The Office, Parks and Recreation, The Simpsons), Adams set out to help develop amazing characters that would find their way into homes every week.

These days Adams is busy making the rounds at conventions and getting to talk to fans nationwide. Recently at Rose City Comic Con, I was lucky enough to sit down with Joel Adams and talk about his career, convention experience, and the possible resurrection of King of the Hill.

Geeks WorldWide: So how did you get started with King of the Hill?

Joel Adams: I started with animation doing The Hulk animated series. I was not an animator, I was a licensing artist and storyboard guy doing commercial stuff and they brought me in to fix The Hulk. It was a show someone else started designing and they weren’t doing a good job so [they] brought somebody in. King of the Hill started out, the networks decided it was looking too much like Beavis and Butthead and they wanted to change it for a network television. They wanted it to look a little different and I came in and started cleaning up the style. I had already started to build up a reputation but I did call like everybody else does. I sent in a resume and I had a little bit of a reputation so they brought me in and I tried out.

Have you seen this:
Best Film and Television of 2020

JA: Well no, we did what Mike Judge [had] established. Mike had already done a design for Hank and so we really just cleaned it up from that point on and did it. [For] the main characters, Mike had a very specific look that he wanted and they were based on his initial sketches. We took it in development and took it to where we did and it was kind of everything else that came after that we had a little credit for.

GWW: I’m sure you’ve done them all a million times by now but what’s your favorite character to draw?

GWW: Do you prefer hat and sunglasses Dale or stripped-down Dale?

JA: Stripped down Dale is funny because you know he doesn’t like to be that way and I like to draw him as Dale.

GWW: What’s the weirdest fan request you’ve got so far?

JA: I don’t know if it’s weird or if it’s great. Like someone wanted Cotton Hill on an X-Men cover, so I did Cotton Hill as Magneto saying, “I killed fitty men and I use their own fillings to do it!” So, it’s stuff like that. I had someone challenge me to do Dale Gribble and they had a theme for it. So, they asked me and the theme was pinball, so what would Dale Gribble do with pinball? So what the hell would Dale Gribble say about pinball… so I said, “pinball is a conspiracy created by the government to make children steal quarters from their parents, leading to a further life of crime, filling privately owned prisons that give the money to real criminals: politicians.”

Have you seen this:
Sony Spiderman Cinemacon Update - SPUMC no More! 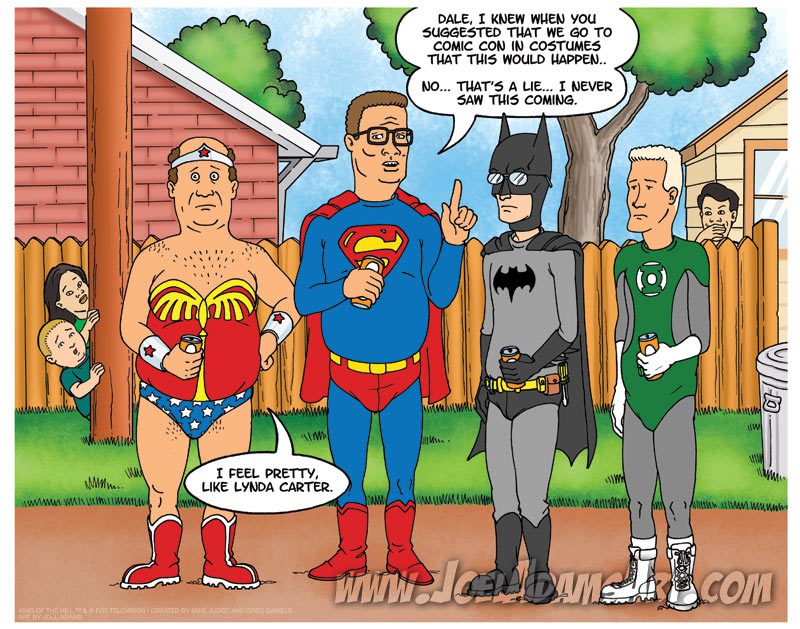 GWW: You go around to all of these conventions and you meet a ton of nerdy guys like us, how does it feel to have had your hands in such an iconic television show? How does that feel going around place to place?

JA: It’s interesting because I didn’t realize how iconic King of the Hill was until I started doing shows, meeting fans and getting the reaction from the fans on what they thought of the show. It’s been amazing, it’s taught me to appreciate the show even more than I did when I worked on it.

JA: It’s hard for me to say that the fan reaction has been so great. I did not expect that part of it. I knew it was a funny show and probably one of the best written American animated shows on TV. Greg Daniels Jim Dauterive, the whole writing staff they had on the show… they were all brilliant but I didn’t know how the fans responded until I started meeting people and people told me their stories. I had a woman that looked like a runway model that came up to me at a Comic-Con, tears in her eyes, her dad and just passed away and she said King of the Hill is the thing that dad and I used to do together.

GWW: King of the Hill is possibly returning, what’s your involvement right now?

You can catch Joel this week at the Baltimore Comic Con or at an upcoming convention near you. For more information on Joel Adams and his convention schedule be sure to check out his website and follow him on Twitter or FaceBook.