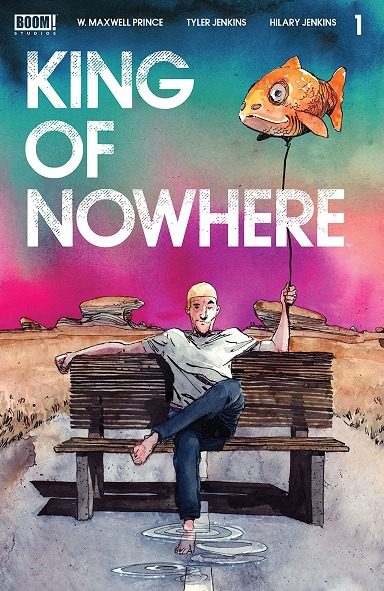 If a storytelling device is used poorly, it’s called a cliché but when it is used well, it is called brilliant. It’s a fine line any writer has to walk whether they are writing a movie, novel or comic book and one that W. Maxwell Prince toes perfectly in the first issue of King of Nowhere.

The comic begins with a man dropped in what can best be described as one of the more bizarre environments reminiscent of a Guillermo Del Toro movie. An alcoholic named Denis wakes up with no memory and a massive hangover just outside the town of “Nowhere” and is instantly greeted by a half-man, half-deer driving a Jeep. That is just the start of the weirdness.

Believing it to be an alcohol-induced dream, Denis befriends a bartender with an upside down face, a patron with a fish head and a one-eyed sheriff. What follows is a chain of events that makes it very clear, Denis isn’t in a dream and is instead in a very wild predicament.

A storyline that is as wild as this one needs a unique type of art that will complete what the comic is trying to portray. Luckily, that is exactly what Tyler Jenkins accomplishes with his unique blend of illustrations that are reminiscent of the Silver Age of comics. This combined with the blending of main characters with their surroundings is almost reminiscent of a van Gogh painting.

Character development isn’t a big concern for a first issue of any issue unless dealing with previously well established characters. The key for beginning an entirely new story is ensuring your characters, particularly your lead, is one the audience will cheer for but still is layered. This first issue does exactly that with just a few words.

Starting the story with the clear message that Denis is an experienced alcoholic with a troubled, at best, past and doesn’t seem willing to change immediately creates a flawed protagonist. This is a bold choice but one that clearly pays off as the story progresses and shows his good side.

Finally, the issue ends with a mysterious villain that says and does just enough to convince the reader to return to the second issue even if they are a little skeptical over the radically out there story. The best compliment King of Nowhere #1 has earned through its first issue is its originality. If you are a fan of “out there” stories with unique artwork, King of Nowhere is the comic for you.

BOOM king of nowhere
Are you an Insider?News, reviews, & updates are just the beginning.