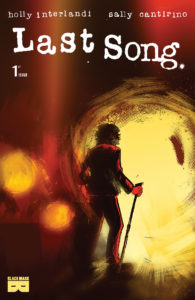 In a world of superhero over-saturation, it is refreshing to see publishers put out story driven books. Black Mask, a very creator friendly company, is one of such places. Holly Interlandi came to them with an idea she had written as a novel and they helped her turn it into a beautiful comic book. Her story tells the tale of Nicky Marshall and how his life was saved. No capes, no aliens, just pure music. This is going to be a quarterly release, and I am already looking forward to the nest issue.

In number 1, we meet Nicky Marshall and get to follow him through the ups and downs of his life. This book holds back no punches, either. Early on we see how the suicide of Nicky’s father affects him and how that leads him to music. This, in turn, leads him to start a band. I found it to be a very engaging story on how the band, Ecstasy, is formed.  We start off with two friends who dream of being rock stars, and then “friends of friends” get added on to form the set. Each character is very unique and thankfully does not really fall into any musical trope.

It is times like this when I am very happy to be part of the Geeks WorldWide community. As I am sure you can tell by my other reviews, I tend to stick to colorful comics. I do not have any problem with black and white comics in general, but bright colors will grab my attention first. (If you want proof, you can 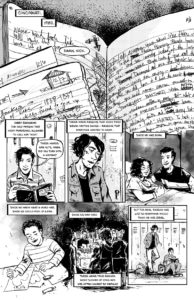 check out my collection of Hawaiian shirts in my closet.)  So a comic like Last Song would not be on my radar normally, and I would have missed out on some great art. Sally Cantirino’s art grabs you from the first page. The story is set in the 1980s and 1990s primarily, and the black & white style really fits.  She is able to put a lot of feeling into two colors. Very well done!

The only problem I found while reading this issue is the timeline. It does not move chronologically, and that works as far as the story goes, once you get into the flow. The issue I had was getting into the flow. It may be because I read a digital copy, so the whole page was not on my screen at once. This does not really take away from the reading, but I did want to warn others who may run into the same thing. With over 60 pages of story, after a while you do not even notice it. (Side note: it only jumps a couple times and it is only within a few years, nothing too drastic.)