Legends of Tomorrow, raise your swords and ride to Camelot! 2X12 Review 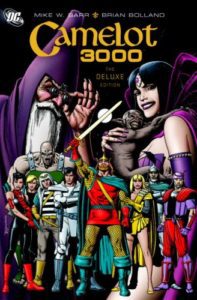 The old order changeth, yielding place to new, it seems our Legends of Tomorrow can be Knights of the Round Table too. In the latest episode our Legends jump to the year 3,000 and then back into the land of Camelot, hunting for pieces of the Spear of Destiny. Quite a bit happens in this episode, including our cast getting to attend the greatest Renaissance Fair ever. We learn that the Justice Society of America has been split up throughout time to guarding pieces of the Spear, leading both the Legends and the Legion of Doom tracking them down. The episode’s title and setting both play homage to another DC title.

The 3000 part of our adventure, while brief, sets in motion the remainder of the episode. We learn that Dr. Mid-Nite has been stationed in the year 3,000 where he is guarding a piece of the Spear of Destiny. Rip beats the Legends there, killing Mid-Nite and obtaining his piece of the Spear. When the Legends arrive they find that Mid-Nite has drawn ‘RIP’ in blood, identifying his killer. Stein also steals a piece of technology that is revealed to be a transmitter used for mind control.

The fun of the episode occurs when the team tracks a trace of the Spear to Camelot. Steel, insisting that Camelot as viewed through the tales of the Knights of the Roundtable is myth, is proven wrong time and time again much to the delight of Ray. We get to encounter Guinevere, King Arthur, Sir Galahad, the Round Table itself, and even Excalibur firmly planted in stone. We also discover that Stargirl, guarding her shard of the Spear, is now acting as Merlin, and Damien Darhk is the ominous Black Knight. Rip, using the mind control technology from the year 3,000, takes control of King Arthur and an army of soldiers, giving the Legends and the Knights of the Round Table the option to give us the fragment of the Spear, or fight Arthur and their fellow soldiers to the death.

Have you seen this:
While We Wait in the Shadows

Stein, Jax, and Heat wave work to use the mind control device that Stein stole and figure out how to reverse the control Rip had over Arthur and his men. Vixen and Sara search for the shard, attempting to remove it from Camelot to keep it from the Legion, after Stargirl refuses to give it up at first revealing in the process that she’d fallen in love with King Arthur, leading to an awesome moment of Vixen, using the powers of her amulet, extracts the sword from the stone, finding the shard at the tip of the blade. Meanwhile, Steel attempts to convince Ray to leave the Knights to die as the team readies to leave, however Ray, taking up the slain Galahad’s sword, augmented by his ionized gauntlet to make it a ‘saber of light’ (since you know calling it that other thing would be major copy write infringement), has a strong desire to fight despite Steel seeing in his historical manuscript that Ray will die in battle. Vixen, who up until the final battle had been about the mission to save the Spear from the Legion above the team, has a change of heart when it comes to the possibility of leaving Ray in Camelot to die, resulting in Vixen, Steel, and Sarah joining the fight while Jax has the idea that perhaps intensity is the key to the mind control device and not just intelligence giving us a fun moment of Heat Wave controlling Stein. 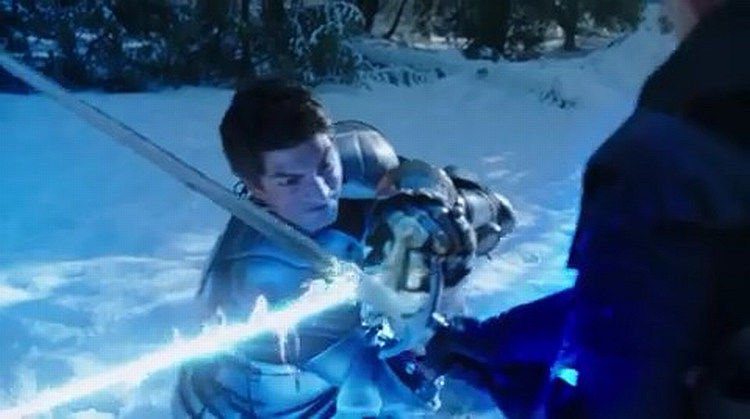 The final battle features a very Knights of the Roundtable worthy rallying of the troops speech from Guinevere. HeatWave overrides Rip’s control over Arthur and the soldiers right before our heroes are about to be slain, leading to Rip being wounded and left by Darhk who ‘doesn’t do rescues’. Sara has Rip taken back into the ship while Ray battles Darhk, Sir Raymond of the Palms actually holds his own against the former League of Assassin member gaining the upper hand with his ionized sword. However when Darhk gets Ray to lower his guard saying he surrenders, he produces a gun and shoots him allowing his escape, thankfully he listened to Steel’s warning and had worn his ATOM chest plate under his suit of armor.

This episode was filled with some good moments, the history vs myth/jokes on the historian moments were funny, however this show still falls victim to suffering from overly manufactured tension. Ray’s naive eagerness and inherent self sacrificial nature is a defining character trait however it is often over amplified when the story needs to put him in danger, the same can be said for Vixen’s ‘mission above all’ mentality. The show is far from bad, it just suffers from difficulty cementing the chemistry amongst the team which leads to some clunky moments. Next week’s episode does have intrigue as it appears that Rip, still brainwashed as an honorary Legion of Doom member, seems to have regained control over Gideon and the ship.