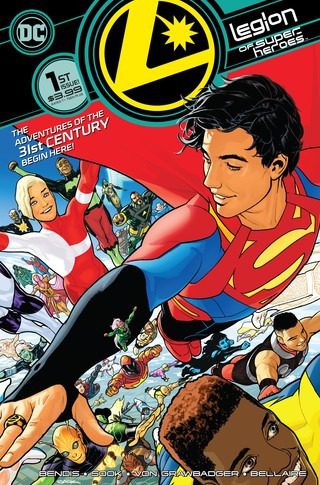 Jon Kent has been brought to a brave new world, but an old artifact will connect him to his past.

Superboy is now a member of the Legion of Super Heroes and he will have to learn all about the new Earth from his new team. As he gets used to a new planet and the history he’s missed, a conspiracy involving Aquaman’s Trident begins to take form.

As the Legionnaires question their teammates about how they got the trident and why, an open portal lets the worst criminals in the galaxy right to their doorstep and not even Superboy might be strong enough to stop them.

As first issues go, Brian Michael Bendis’ Legion of Super Heroes is okay. The dialogue is fun and the characters seem interesting. Unfortunately, you don’t get a sense that this massive cast of characters are going to be compelling enough to sustain a story that I never really got a sense of in this first issue. Other than the initial shock of a new world and its inhabitants, I didn’t get the sense there was a purpose for bringing Jon to the future. There are a couple of plot elements that tease things sprinkled throughout other books and that’s fine, but I need to see more of this world through Jon’s eyes to able to find something to appreciate about it.

Ryan Sook makes the world and the characters look fantastic in this first issue.

legion of super-heroes Legion of Superheroes Superboy
Add your voice!Join the conversation on Discord...
Join Our Discord