Thanks to Lenovo for sending us this test unit.

As All-in-One (AIO) computers have become thinner and displays have improved, I’ve found myself more and more interested in setting one up in the kitchen or hallway of my home. So I decided to take a break from ultraportables and gaming laptops and asked Lenovo to mix it up (note: not to be confused with ‘Miix it up’). I’m delighted by my initial experience with the Ideacentre 520S (“520S”). It packs a 7th-gen Core i7, 8GB of RAM and Dolby Home Theater speakers inside a 23″ FHD touchscreen IPS monitor. I found this model at bestbuy.com for $879.99. Therein lies the biggest issue I have with the 520S – the price. 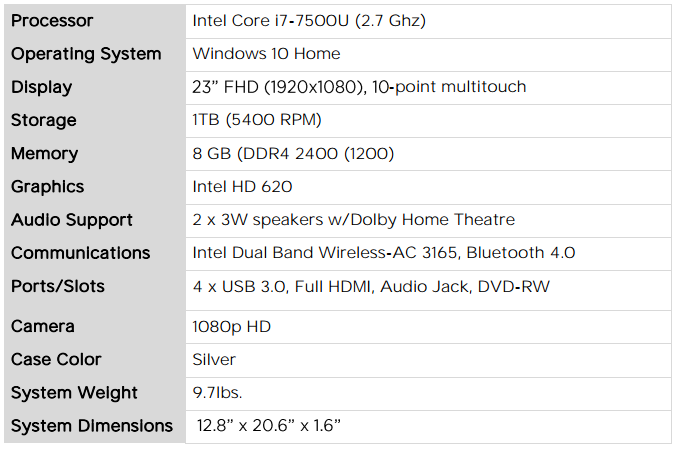 The 520S feels like it’s been built for people that want to surf the web, do some light Microsoft Office work, and watch movies. But those people don’t want to use a tablet or ultraportable laptop. I feel this way because the 520S has the power and display size to mirror those needs, but presents itself as an AIO that is stationary. It’s not a particularly large or heavy device; should you want to move it from one room to the next, you can. Where the 520S shines is the simplicity of it. Out of the box you receive the unit itself, which just looks like a 23″ monitor. Also out of the box is a wireless keyboard and mouse that follow the same silver and black color scheme as the AIO unit itself. From unbox to browsing the web took roughly 30 minutes. I have to admit, I didn’t expect the 520S to have a touchscreen. Like any good reviewer I touched the screen just to make sure, and to my surprise it has a good feel to it. I like to stand while I work and that makes for a good touch experience. Granted, Windows 10 is, at best, touch-friendly; it’s not a place for productivity via touch.

It’s hard to talk about the display without talking about the ports, because everything is so close together. That’s a good thing. Just under the screen is a sound bar, provided by Dolby. In the middle, tucked into the speaker area is a hidden 1080p webcam with a USB 3.0 port on either side. On the rear of the 520S are 2 additional USB 3.0 ports, an HDMI input, Ethernet port, headphone jack and power. The HDMI input is awesome. I connected my PS4 to it and switched inputs with the tap of a button that is tucked behind the right side of the AIO, just above the power button. I’ll be honest, the power button was not easy to find. I expected it to be on the side or perhaps near the “Lenovo” logo. Alas, that is not my only gripe with the 520S.

Accessories are critical. Tactile contact is part of what makes computing fun and engaging. Every time I get to hold my Nintendo Switch or type on my Razer Chroma keyboard, I get excited. Bundling a keyboard and mouse with the 520S is a good idea – its a single transaction and aides the “get started easy” idea that I fully support. But they’re just not great input devices. They both feel cheap – like what you would expect from throw-in accessories back in 1999. That’s ok, again, it’s a nice idea. If you plan to do any serious work on this device, which it’s more than capable of, you should find yourself a mouse and keyboard you’re comfortable with. Lenovo makes great keyboards, particularly for their laptops. You won’t struggle to find a good Bluetooth or otherwise wireless setup under $100. I can live with every negative I’ve listed thus far. The next is one I can’t really live with and that’s this AIO’s stand. While it was easy to install and can rotate well, it can’t raise or lower. I own monitors that have that ability and they are absolutely heavier and more bulky. I suspect that was Lenovo’s motivation here. But combined with poor viewing angles and I could never seem to feel like I had the best posture to work for an hour straight on the 520S, comfortably.

Bear with me here: if the 520S had a small battery that would provide 30 minutes of power so you can move it around your home or office, it would be a game changer. Give it a 2 hour battery and now you have a portable you can couch-surf with and dock (like a Nintendo Switch) when you need to. Ok, that’s a big ask. It changes the complexion of the product. Here’s another that is easier: double the RAM and move from an HDD to SSD. SSD prices have dropped considerably and the performance impact is vastly superior to HDD. Furthermore, it keeps the machine quiet. The challenge with the 520S is it’s a cool design that is about $150 overpriced. I suppose if it included a battery to make portability easier, it would be a more attractive device that justifies the $880 price tag.

AIO all in one computers ideacentre intel lenovo
Add your voice!Join the conversation on Discord...
Join Our Discord