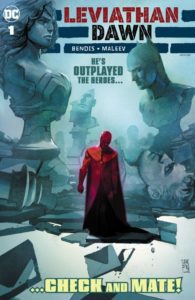 (WARNING: Spoilers for Leviathan Dawn #1 ahead.)

Have to give it to Mark Shaw, that guy knows what he’s doing. He has a vision and a carefully calculated plan.

Shaw is also aware of the ridiculous cycles so many villain-types fall into when fighting heroes, which is what makes this guy so dangerous. And as the first layers of his new plan unfold in Leviathan Dawn #1, it’s clear this newly formed group, Checkmate — a team name used previously in DC’s history — is going to have its hands full.

But it looks like the members of Checkmate have another obstacle before they try to pick apart Leviathan.

There is very limited trust amongst this group. Understandable given how Leviathan has turned the world on its head. But this is also a bizarre assimilation of characters from the DC Universe. Of course, some of these characters have had to interact with one another somewhere along the way, but it wouldn’t be stunning to find out most members of Checkmate are meeting one another for the first time. So there’s no way there will be any friction with this team whatsoever.

As a whole, the story itself has potential. The big question the reception of Checkmate. There are some names readers care about, and there are some readers know well but may have a hard time investing in — then there are some that are complete wild cards. Obviously, the story is centered around Checkmate v. Shaw, so it’s pretty important that some of these characters resonate if this story has any chance of succeeding.