Live life to the fullest. Play the hand your dealt. Make each moment count. These are some of the phrases tossed around when you find out you have a chronic illness, or in the case of the show, Life Sentence, cancer.

I was drawn to this new show premiering in January on the CW for two reasons. The first was being able to relate to the premise of the show, and the second was Lucy Hale. I’ve been a fan of hers for years, and was intrigued to see how well she shed her persona as Aria Montgomery, a role she played for seven years. It only took five minutes for me to see Lucy as Stella Abbott.

The relationships on Life Sentence are the essence of this show, and the chemistry between the cast flows seamlessly. For example, Elliot Knight plays Wes, Stella’s husband; the two met during Stella’s trip to Paris, had a whirlwind relationship, and got married on a whim. Lucy Hale and Wes Knight naturally gravitate towards and play off each other. I love and admire television shows that can portray believable parent/child, brother/sister, wife/husband relationships. It makes me become more invested in the show and the characters. Life Sentence starts off with a solid pilot that is anything but simple, and that’s why it caught my eye when the teaser trailer premiered in May. Stella has been fighting cancer for eight years, her diagnosis is terminal. So, she took chances, never worried about consequences, traveled around the world, fell in love, and got married. But, just as Stella is planning her funeral, complete with an elaborate funeral cake, her doctor surprises her with the news that she is going to live. Her cancer has been cured. She has beaten the unbeatable odds. As her family celebrates, emotions quickly play on a stunned Stella’s face; shock, awe, some joy, but mostly fear. How do you come to terms with living after making your peace with dying?

Have you seen this:
Jungle Cruise (REVIEW)

Some people may not understand Stella’s fear of life…of finally living each day to live, and not as something to check off your bucket list. But, trust me, the writers did an amazing job with the pilot, and in turn, the actors bring the words and actions of the characters to life. In an instant, the lives of Stella, Wes, her parents, and her siblings are turned upside down. Stella, and viewers are taken on a journey as eight years of secrets begin unraveling. The lives of her entire family have been stuck on pause to ensure that Stella was living her best life. Now, the fast-forward button is pushed. The pilot of Life Sentence is an emotional free fall, in the best way possible.

Stella is forced to reevaluate her life and her relationships, as she enters the post-cancer world. She stumbles as she sheds her rose-colored cancer glasses; no longer able to use her illness as an excuse, and realizes she really wasn’t living life to the fullest. Her brother Aidan, (played by Jayson Blair), is kind of a mess himself, but offers up the advice that seems to get through to Stella; “You beat certain death. I think you can figure out how to handle uncertain life”

Cancer provided Stella and her family with a safety net, and it will be interesting to see how they all adjust without it. Will Stella’s marriage survive? How will her parents and siblings embark on lives not centered on Stella? The first episode of Life Sentence leaves you invested and wanting more. You become an honorary Abbott family member.

I was impressed with the writing, directing, and music used in the pilot. Everything flawlessly meshed together. The final scene and song choice go hand in hand; and are executed perfectly. Life Sentence comes full circle in the end, echoing the same feeling as when the episode began; uncertainty. Yet, this uncertainty is filled with hope and promise. 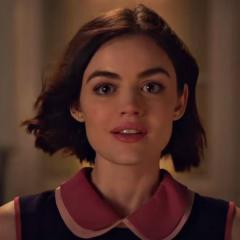 Life Sentence is a true depiction of how families and loved ones are affected when a person is, or in this specific case, isn’t sick. Lives are in turmoil. Unpredictability and chaos are the only constants. You slowly learn to put the pieces back together. It’s relatable. Families can be, and are often messy consistent works in progress. The characters on Life Sentence have flaws, and I’m certain the journey they take us on will continually shock and surprise us every week.