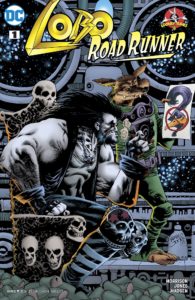 Wile E. Coyote travels to the far reaches of space to hire Lobo to hunt down and kill his greatest nemesis of all time, the Road Runner.  When the Coyote and Lobo are after him, the Road Runner knows if they catch him he is through.

I have to admit, after reading the Marvin Martin comic last week, I was nervous picking this one up.  This issue erased those memories!  Lobo v. Roadrunner almost reads as an origin story for my favorite enemies.  It starts in 1949 and makes its way into modern times.  Morrison makes the immortality of these classic characters make sense.  To top things off they throw in Lobo!

Now Lobo is a character that a lot of people may not be familiar with.  Just to give you an idea of what this guy is like, 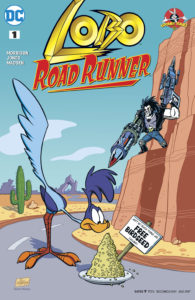 let me give you a quick rundown.  Lobo is an alien born on the utopian planet of Czarnia, and works as an interstellar mercenary and bounty hunter.  He was first introduced as a hardened villain in the 1980s.  Soon fell out of use with writers.  In the early 1990s, he returned as an anti-hero biker with his own comic.  Now he is trading jobs with Wile E. Coyote and chasing the Roadrunner.

While the Martian combo sounded great in theory but did not work out.  This combo or revenge-happy characters actually works out.  The mixture of cynicism and revenge that Wile has fits with the “don’t give a frag” attitude of Lobo.  The art style for both parts of this issue work for the characters.  I will not give away what Wile has to do in return for Lobo’s help, but it is pretty awesome!