The ‘Loki’ Disney+ series has another cast member, sneakily added to IMDB Pro today, with Cailey Fleming. She will play “Young Sylvie,” which sounds like the character Sylvie Lushton, aka Enchantress. 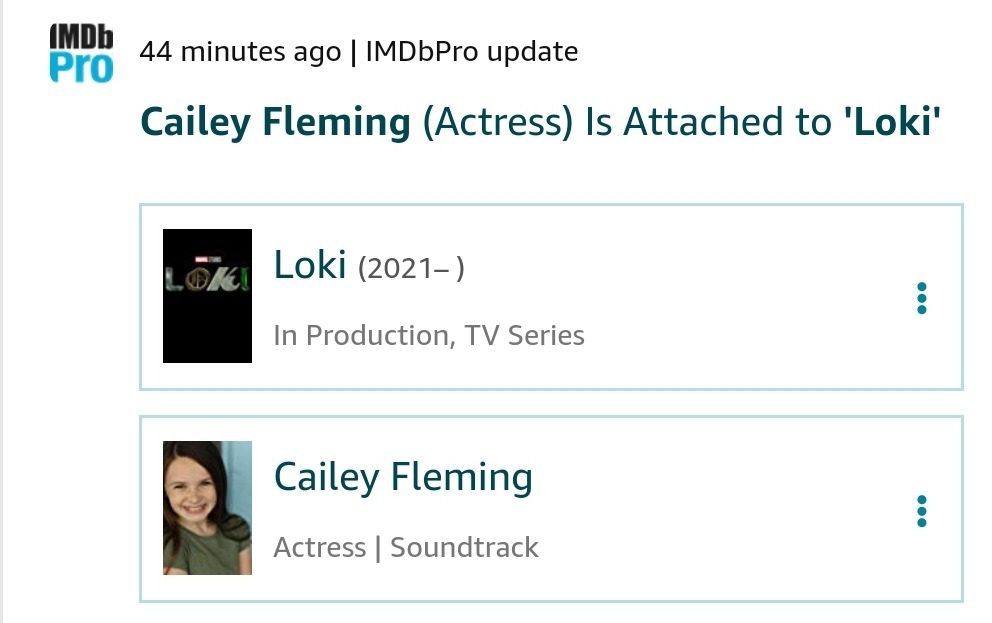 Fleming was recently in an episode of the Shudder reboot series ‘Creepshow.’ She was also young Rey in another Disney project: ‘Star Wars: The Force Awakens.’ Now, she is currently starring in the resilient AMC series ‘The Walking Dead,’ as Judith Grimes.

Moreover, Tom Hiddleston will reprise his role as the titular character, marking his seventh appearance in the role. Other cast members include Sophia Di Martino (‘Yesterday’), Owen Wilson (‘Wonder’), and Gugu Mbatha-Raw (‘The Morning Show’).

The premise of the time travel series is below:

“The series will see the return of Loki (Hiddleston), the God of Mischief, from the altered 2012 timeline in ‘Avengers: Endgame,’ appearing throughout certain moments in human history as an unlikely influencer on historical events.”

Herron made a comment regarding the series at D23:

“We’re taking Loki into an entirely new part of the MCU. We love this character as much as you guys do and we just can’t wait to spend six hours with him.”

“There is a huge time travel component. There will be a man-on-the-run quality to it, and we get to explore more human sides of Loki.”

Back in November, we at The GWW discovered that ‘Loki’ is holding the production company “Limbo Productions I LLC.” This may mean that this will be the first MCU Disney+ series to have multiple seasons, but we will just have to wait and see.

Marvel Studios will premiere the series in Spring 2021 on Disney+, before the release of ‘Doctor Strange in the Multiverse of Madness.’