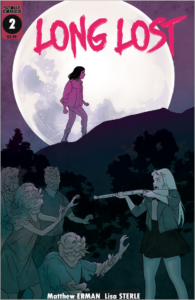 Long Lost is an indie comic book from writer Matthew Erman and artist Lisa Sterle. It follows two sisters as they unravel a supernatural mystery after being reluctantly thrown back into their eerie hometown. The book is currently divided into two separate books, book 2 begins with issue 7.

Throughout the story, supernatural occurrences are met with extreme apathy by the main characters Piper and her younger sister Francis. Their attitude adds to the overall oddness of the book. The nonchalant manner in which the sisters meet strange creatures on their journey is similar to Over the Garden Wall from Cartoon Network or the literary classic, Alice’s Adventures in Wonderland.

Additionally, the art style reminds me of Stranger Things or the more known indie comic, Paper Girls. This book hits to the 1980s nostalgia for stories that are creepy without being scary. Sterle’s art is simple but carries a light to varied tone that is a welcomed dichotomy to Erman’s ever-darkening plot. The art is not done in color, however, the use of solely black and white add to the mystery and whimsy of this strange but delightful story.

In the latest issue, out later this month as of this publishing, Piper and Francis are separated after facing a monstrous creature following returning to their childhood home. The relationship between the two sisters is strained but it’s clear their separation and Piper’s selflessness will ultimately bring them closer to both unraveling the mysteries held in Hazel Patch and each other.

I have always been a fan of stories that are strange and touch into the madness of the human psyche without being outright gory. So far, Long Lost has answered questions by adding more and because of it, I am hooked. I highly recommend adding this to your sub list and picking up the previous trade and issues if you have not already. This is a fantastic, whimsical read that will deeply appeal to a lot of fans.