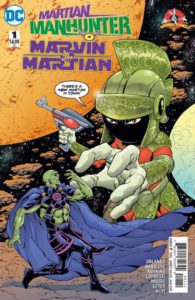 Sometimes two characters make so much sense together that you wonder why it has taken them so long to come together.  Before reading Martian Manhunter/Marvin the Martian Special #1, I would have wondered the same thing.  This cosmic, comic combination did not need to happen.  While that art in the first half of the book is good, the way the characters speak keeps bouncing back and forth between the Looney Tunes and typical DC superhero styles.  Add this to the fact that the story itself seems forced and predictable.  The only saving grace is the second part of the issue.

The second half of the book is drawn and written in the style of the old Looney Tunes cartoons.  Surprisingly, this works for both characters.  John Loter’s art style 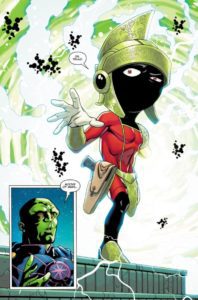 really conveys a sense of whimsy and charm that you might think J’onn would get lost in, but it works on a few different levels.  We get to see our rough and tumble hero in a somewhat more jovial angle.  The way language is used in the Looney Tunes style is better than in the DC one.  I can hear the characters’ voices in my head as I read.

All in all, if you are a fan of both characters, you should pick it up.  But keep it sealed for collecting purposes, there is no real need to read it.  There are enough comics about both characters separately out there ready to enjoy.  I believe that this is simply a money grab from DC.  It will not get new fans and will more than likely disappoint existing ones.