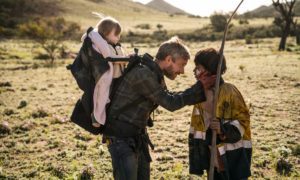 In the upcoming horror drama Cargo, Martin Freeman plays Andy. Stranded in the Austrailian outback in the aftermath of a violent pandemic, Andy finds himself bitten and infected. With the clock ticking before his transformation, Andy must find safety for his infant daughter before he turns on her. A task made more difficult by both the undead and the violent militias hunting them down.

From the producer of The Babadook, and starring Martin Freeman, comes Cargo. Based on the viral short film, this is the story of a man and his infant daughter who are stranded in the middle of a zombie apocalypse in rural Australia. And when he becomes infected, the countdown begins for him to find her protection before he changes forever.

Have you seen this:
Sweet Tooth Renewed for Season 2 at Netflix

Cargo premieres on Netflix May 18th.

cargo Martin Freeman Movie Trailer netflix
Are you an Insider?News, reviews, & updates are just the beginning.