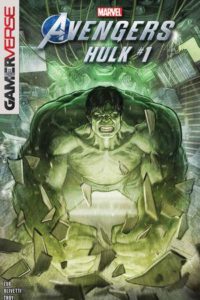 Avengers: Hulk #1 is the continued preview into the storyline created for the upcoming Square Enix game, Marvel’s Avengers. Marvel scheduled these one-shot issues to ramp up to the May release of the game. Now that the game release is delayed until September, the comics lose a little momentum without the game to connect to. Fortunately, the comics work as character introductions and provide a hint of how the game will characterize each of the heroes. The storyline is limited in scope, but it provides a different take on Bruce Banner compared to the MCU and the current Immortal Hulk run.

With the release of Avengers Iron Man in December and Thor in January, writer Jim Zub started to introduce readers to this world’s Avengers. Hulk includes more character development than the action-heavy Thor. Hulk #1 still contains the obligatory panels of Hulk smashing, but more time is spend with Bruce Banner. Jim Zub has already portrayed Bruce as confrontational and short-tempered in the first two one-shots and that depiction is expanded upon here. Bruce has a developing romantic relationship with a fellow S.H.I.E.L.D. scientist, but he quickly becomes physically aggressive. Bruce is also dismissive and condescending of a fellow scientist. This Bruce’s Hulk may live closer to the surface and maybe more a part of his existing emotional spectrum than current fans are used to.

Bruce’s abrasive character does not have control over Hulk but is starting to try to direct Hulk and his actions and these attempts may foreshadow developments in the game. Zub’s story hints at the energy crisis the game world is dealing with. The trailer for the game has the Avengers protecting a new energy source and Zub’s reference to the crisis works to tie the two mediums together. Ariel Olivetti’s artwork also ties the comic to the game nicely. The Hulk’s shape matches the bulky model from the game, and Olivetti nicely contrasts this bulk with the scrawny, thin body of Bruce Banner.

Avengers: Hulk works as a teaser to the greater game world, and Zub’s angry Bruce Banner creates story opportunities for the game to further explore. Marvel has already shown with their series set in the PS4 Spider-man game that they are interested in continuing their game worlds, the question is if readers care enough to remain in this world.