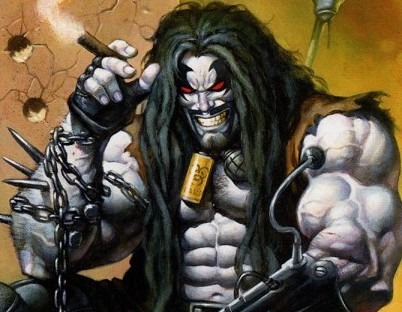 The Pitch: The Boy Scout vs. The Bastich. It’s time to get Captain America out of his comfort zone. Meaning, he fights calculated supervillains often enough. Let’s put him up against a scumbag who only cares about unleashing chaos with every step he takes. More than anything, this crossover needs to happen just so we know what a conversation would sound like between these two very different individuals.

Plot: The Main Man visits Earth to take out a hero he’s never heard of. But Lobo soon realizes it’s not the Earth he knows — and the welcome he receives isn’t exactly the warmest. Captain America soon receives word that a new extraterrestrial being has visited Earth. Not only is this one hostile, he also appears to have a fairly foul mouth. Cap has to find a way to defeat Lobo as this overpowered bully tears through town after town while trying to find a way to get off-planet.

Other Characters: Falcon and Sharon Carter are part of the group of S.H.I.E.L.D. agents that first fought Lobo. They give Cap an idea of what he’s up against after Maria Hill brings Cap in on the mission. Also, the hero Lobo was sent to take out was Wolverine. (Could set up for another battle in during the crossover event.)

Notes: Lobo will be what draws everyone in, but the way Cap responds to his opponent could be what makes this book — which is why Young is a good fit to write this story. He’s written Rocket Raccoon and Deadpool, so he knows how to deal with weird and otherworldly beings. … Kelly Thompson would also work very well. … Now, as much as this story should be funny, there need to be some badass elements to it. That’s why Bennett is a good fit here to work with Young. … Also, maybe get Tyler Kirkham to do a cover or two for this?