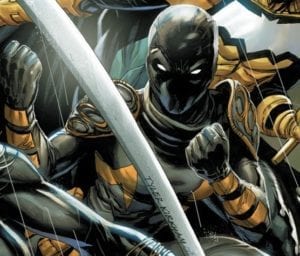 The Pitch: Life hasn’t exactly been kind to X-23 or Orphan. They don’t exactly trust easily — understandably so. But, they don’t have much choice now that they’re in Bane’s way. (And he’s as jacked up as he’s ever been.) This encounter gives Laura and Cassandra a unique opportunity. Of course, they won’t be working with carbon copies of themselves, but the experience will give them an idea of what it’s like to deal with someone who has similar personality traits. Maybe they can learn a few things from one another — perhaps without trying to kill each other?

Plot: X-23 and Honey Badger are busy trying to hunt down their least favorite sibling, Daken, who was last seen in Chicago. They find out he’s joined forced with this mountainous man named Bane. As the sisters try to take on the pair, they quickly realize they’re no match. If not for some unexpected help, Laura and Gabby might’ve been in a lot of trouble. But is this masked vigilante someone X-23 can play nice with long enough to take Daken down? 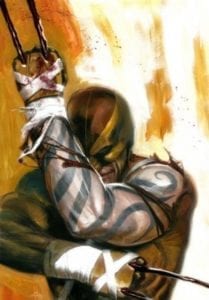 Setting: Chicago in the Marvel Universe. Too much stuff going on in New York.

Other Characters: Honey Badger is too much fun. She has to accompany her sister. Also, with Laura and Cassandra working together, we need some source of levity. Gabby can also assist both in their respective moments of reflection. Bane is the big bad in this. Incorporating Daken provides wild battle opportunities. More importantly, the sub-story of Daken and Bane’s alliance would be interesting.

Notes: Hill knows Cassandra. But, if Marvel and DC aren’t looking to consistently have a writer-artist crossover from the companies each time, Tom Taylor is another obvious option as this story’s writer. Mariko Tamaki wrote the 2018-19 X-23 series with Olortegui and Juan Cabal as pencilers, making her another option. Olortegui wasn’t on the project as much as Cabal, who’s a good choice for artist, too. I just like Olortegui’s style a bit more. If Cabal did the cover, or vice versa, you’re going to get readers’ attention — if the title on its own doesn’t do the trick.