Episode 1: ‘The Fury of Iron Fist’

As a big fan of the first season of Iron First, albeit a member of the minority I’m well aware, I was very excited when Season 2 landed. Danny Rand has always been a very interesting character to me and I feel like Finn Jones breathes a multi-faceted life into him. Admittedly his time on Defenders and his brief appearance in Luke Cage’s second season gives a vastly matured and more flushed out version of Rand than we see in his first season. Season 2’s Rand is a continued evolution, his metamorphosis shaped by all of the events we’ve seen him experience, but most influential being finding love in Colleen Wing, the loss of K’un L’un, and Matt Murdock asking him to protect his city in his absence. The culmination of those leaves a vastly matured Danny, still capable of joking and positivity but far from the naive iteration, we met in the first season. We get to see a nice balance of Danny’s now, the fun-loving Danny Rand, happy with his life with Colleen and the quiet intensity of the Iron Fist, stalking the streets, blinding the darkness of evil with his glowing Fist.

The initial threat the ‘barefoot billionaire’ faces is the growing intensity and brazenness of the Triad gangs around the city, predominantly the Hatchets and the Golden Tigers. The seeming defeat of the Hand has created a power vacuum causing the Triad gangs to grow hunger and more vicious. Moving away from the Hand as the nameless/faceless ground level bad guys for the series allows Iron Fist to feel darker and grittier by balancing the Iron Fist mythos with the grounded street gang enemies instead of the horde of Hand Ninjas like before. The fight choreography continues to expand out from the first season. Jones appears to have become even more comfortable and fluid with the movements adding even more power to Rand’s attacks.

In addition to further expanding Danny, both in persona and combat, the rest of the characters receive added attention from their first appearance as well. Jessica Henwick continues to excel and scene steal as Colleen Wing, battling her past as our story begins, having hung her Katana up both literally and symbolically. The return of Davos and the Meachum siblings each come with their expanded personalities as well. Flushing out the ensemble beyond their first season iterations, following the trend of the Marvel shows of continuing to build them up into immensely well-rounded characters. A new edition to the cast, Alice Eve’s enigmatic Mary, makes a brief appearance, running into Danny seeking out directions, appearing sweet but masked with an air of intrigue about her.

Those who were fans of the first season of Iron Fist will continue to love the ‘more mature’ direction this season takes the character down. Whereas those who were underwhelmed by the ‘too cheery’ take for a Marvel Netflix show last season should consider giving the Immortal Iron Fist another chance. The handling of the character, even for someone who enjoyed it previously, was far superior to the first draft. There is a good balance of action and story, persona and grand storyline motivation taking place, and ultimately just a good episode to kick off the next season. It was apparent that the showrunner was aware of the feedback the first take had received so they took extra measures to provide the Iron Fist I think they not only felt the fans wanted but intended to provide in the first place. Also, still the coolest intro graphics of the Netflix shows, music may be up for grabs, but the Iron Fist kata takes the cake for me. 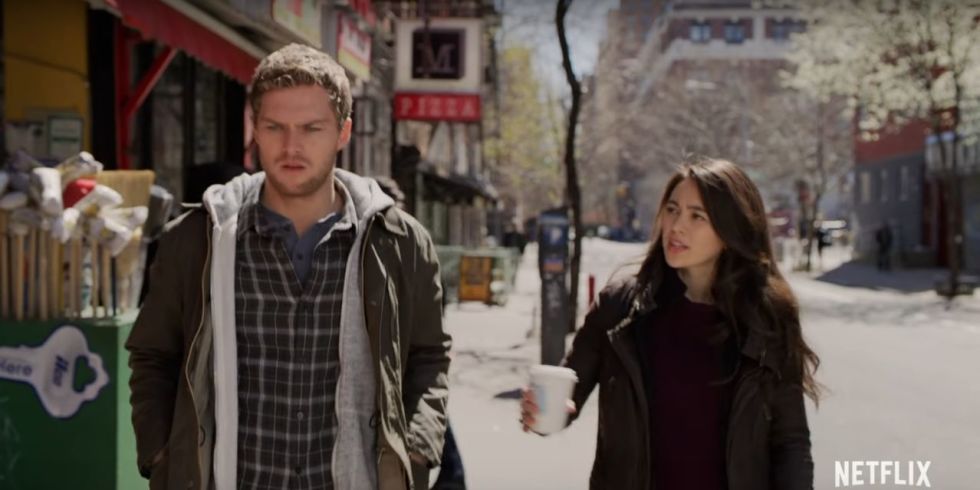 Episode 2: ‘The City’s Not for Burning’

Following a very strong opening episode, the second episode is admittedly a bit slower paced than the initial episode. There is a lot more story building than action scenes, which, while slower moving, gives a lot more weight behind the character motivations and puts the chess pieces on the board as the game begins. The predominant action is a beautifully illustrated sequence, serving to provide backstory, action, and a very fun comic Easter egg as well. We learn more about the happenings among the Triads and what fate it could yield for the city. We also take more steps in Colleen’s journey as well as getting even more of a reason to believe there might be something about Mary that isn’t quite right.

Tensions continue to rise for many of the principal characters, as every step they take presents them with more questions than answers. It is very interesting to have a show whose titular character is renowned for his fighting prowess, where the bulk of the episode’s action is isolated to one setting. Leaving everything else that takes place around that setting to rely on investigation and dialogue. It is really a testament to the writers and the actors to not lost the viewers with an episode like this, especially at the place in the season it’s in. If the action that we do get wasn’t as interesting and storytelling as it is, I would also be a little alarmed to see a predominantly story building episode take up the second episode slot in a ten episode season. Thankfully our showrunner and team know what they’re doing and orchestrate this slow burn episode very beautifully.

It’s quite nice to see the non-titular female characters get significant screen time and plot driving as well as individual storylines. The positive representation is probably quite easy to provide with the incredibly powerful, captivating performances by Jessica Henwick, Alice Eve, and Jessica Stroup. Their time on screen is never wasted and it always leaves you intrigued by the events unfolding around them. While all three ladies steal scenes every time they’re on camera, it goes so beyond having a clever quip. They keep the male characters on the course and both intentionally and inadvertently drive the primary plot of the show through their individual storylines and their influence on the actions of others. It’s not overly common for the story driving actions to be aligned to the non-titular female characters, so that is a breath of fresh air coming from this season as well.

While it may not have contained the same type of high-intensity action the season opener did, the balance of the styles of episodes still fit very well within the flow of Iron Fist. If you will, it could almost be said, the first episode was the Yin, or outward moving energy, with the quick moving action sequences, with the second episode providing the Yang, or inward moving energy, with a slower burn, far more story development, and the action sequences it does have to resonate more internally than outwardly like the first episodes do. The balance of energy in the world of martial arts is an integral aspect of fully developing your skill. I would stand by the notion that our Chi powered defender of New York has a similar need of balance for his show as well. Fine tuning the light with the dark, the humor with the intensity, and the action with the story. To me, any missteps that the first season may have taken, there has been substantial thought and effort into remedying those for this beautifully flowing second season.