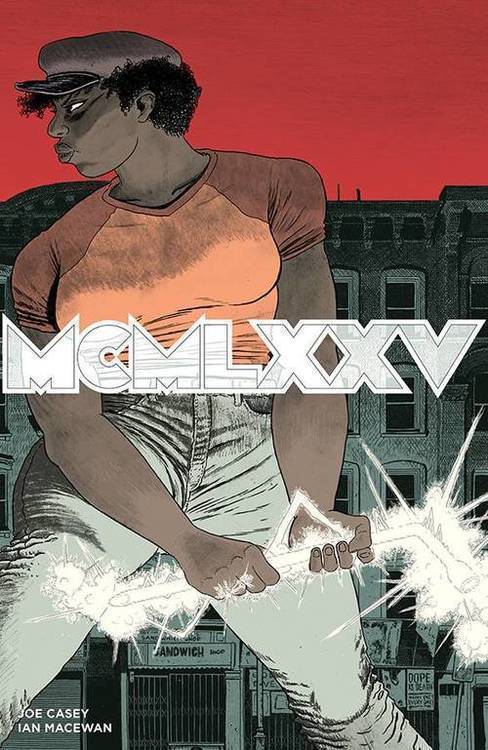 I didn’t pay attention to this series upon its initial release and slept on it. Now after reading this three issue mini-series I will not make that mistake again if these creators have a chance to bring this book back for another round. MCMLXXV (which is the roman numerals for 1975) is the tale of NTC cabbie and local badass Pamela Evans. Pam is anything but your typical 1970’s black female stereotype. She’s tough, sassy, and carries an enchanted tire iron that she uses to fight the evil supernatural forces that want to consume our world. Think of Pam as a working-class Foxy Brown if she had been given Thor’s enchanted hammer. Its kinds like that, but still something totally different.

Casey sucks the reader back into the soulful ’70s and lets the nostalgia wash of you of a bygone era as nighttime DJ Prefect Patterson plays the hits and the slow jams. Listening in her cab Pam takes fares from one stop to another, but on the night we meet her she runs headlong into a throng of angry ninjas. That’s just the start of a wild series of events that culminates in an all-out war on the streets of NYC as the Pamela lead street gangs take on the invading horde of supernatural beasts.

In the midst of all of this, we learn how Pamela got her magical tire iron, how she came to be the defender of our realm, and why the forces of evil want her gone. Not bad for a graphic novel that only collects three issues.

What really sells the series is Macewan’s art, whose artwork is a stylized throwback to the days of R. Crumb, Richard Corben, and to a lesser extent Moebius. The flair and the depth of the art is the bread and butter of this series. While I was unsure of how I felt about the visuals at the start of the book, by the end I couldn’t imagine anyone else bringing Pamela to life. This was Macewan’s tale to tell and it was told masterfully.