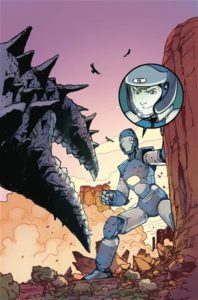 The cadets disobey orders and go up against one of the alien kaiju they call Sharg.

An action-packed fourth issue is exactly what was needed after such wonderful setup in the prior three issues. Greg Pak has accomplished a ton of world building and character development in a short amount of time. In the battle against the Sharg, Yu and Park’s frenemy relationship took center stage. They probably won’t be going the Prince Zuko route with Cadet Park, but she hasn’t turned a new leaf just yet. The battle was fun, I just wished it lasted a little longer.

One thing I find interesting is Skip Tanaka’s willingness to send such young cadets off to war. He’s even breaking an established rule for first year cadets. As a reader it’s great that we don’t have to watch the characters be punished for disobeying orders, but it was surprising. One thing is for sure, Stanford’s mom won’t be happy with whatever Tanaka’s got planned. 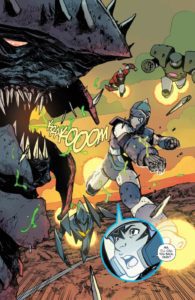 The line work was great as usual, but one thing that really stood out were the colors. Triona Farrell is the unsung hero of the series. Each panel bursts with colors, and never feels like the last. The colorist really helps define the tone that Mech Cadet Yu is going for.

Another fantastic issue. This was originally suppose to be the last issue of the mini-series, but I’m really happy to hear Boom! made this a regular series. There is so much story left to tell in this world of mechs. One of the best first four issues to a new comic book series I’ve read in a long time.