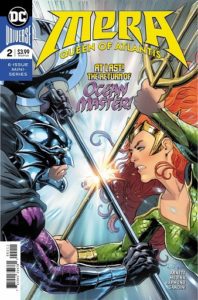 In issue #2 of the 6 part mini-series, an enemy has found Mera. Orm is back and clearly life with a family on land hasn’t completely transformed him. He’s torn. Can he overthrow the Queen of Atlantis from the throne? The Ocean Master could escalate the civil war.

This issue is titled ‘King and Queen of Atlantis’ and now I wonder if they mean Arthur or Orm. Now that  Orm knows how weak Mera’s powers are and he’s going and to use that to his advantage. The Ocean Master id a giant threat to her people. I think he’s going to escalate the war. She’s only exiled to keep peace on the dry earth’s end. To keep the peace between their people and the ocean.She needs Arthur more than ever. Still doesn’t know if he’s alive or dead. She can’t defeat him on her own. Now he knows she has limited power. 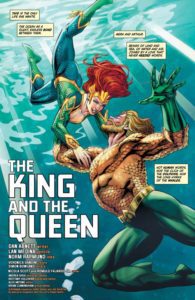 In issue #2 I still see nothing but Mera. She’s wonderfully written and drawn. Her attitude and her strong will are spot on. Mera deserves the spotlight and this is showcasing her perfectly. She is strong on her own and that’s what I’m seeing within Abnett’s wonderfully written story. She’ll do anything for ocean dwellers even in the absence of her husband.

I love the art and the colors. All the way from the costumes down to the facial expressions. I can already see that this series is going to dive deeper into the war and relationships with families. I’m hoping she finds Arthur before his brother does. I’m really excited to see the direction this heading. Too bad it’s a mini-series! The fact that Orm is back is already made this comic twice as good than Issue #1.