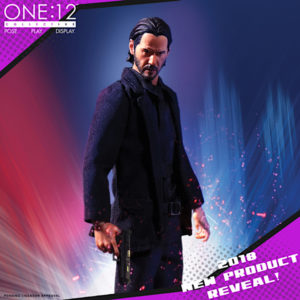 If you have listened to the Confirmed Epic Podcast over the past few months you know there is no company we love more than Mezco right now, specifically their One:12 Collective line.  For anyone unfamiliar with these figures, think of them as little (6 inch scale) Hot Toys, that generally sale for a around $85 shipped, before they go up to as high as $250 in value on the after market.

The latest reveal from the company that has collectors around the World buzzing is based on Keanu Reeves portrayal of hit man: John Wick from the very popular shoot em up franchise.

Personally this wasn’t a reveal that I was looking forward to, as I passed on the two John Wick films due to their extreme gunplay.  I however may be in the minority, as according to recent Mezco polls Wick is in top 10 most requested figures for the every popular line.

Lets us know what you think of the John Wick Mezco figure in the comments below, and look for plenty of New York Toy Fair 2018 coverage next week on episode #85 of the Confirmed Epic Podcast!