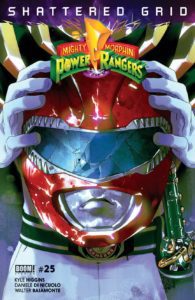 We’re finally at the start of Mighty Morphin Power Rangers big event known as “Shattered Grid”. In previous reviews of the power rangers comics, I have mentioned how they are very much like the superhero comics done by the big two in the industry. This event starts off no differently. We’re already getting set up for a big crossover with different rangers from different universes as it seems this book’s version of their multiverse is getting ripped open. Crossovers in the TV series have been a very regular thing for many years now and it’s exciting that we’re going to get the same thing in the comics. The action that we usually get in this comic takes a back seat as we get a slow setup with the evil version of Tommy (Lord Drakkon) as he works his way to retaining his powers and starts taking down the power rangers. Since Drakkon had escaped, Jason is taking the situation extremely serious.

Given that they barely won their last bout. It’s here you’re seeing Jason being very more efficient in his leadership role and not questioning 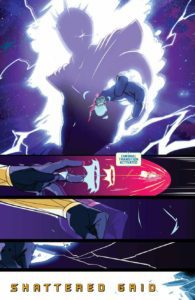 the calls he has to make and who he chooses to no longer work with. Kimberly and Tommy go out on a date and I believe this is the first we’ve seen these two go out together since this comic started. I’m glad Kimberly is finally opening up a bit more to Tommy and Tommy seems to finally be over with worrying about the kind of person he will become. Billy and Trini get a quick spot as they work on understanding the Morphin grid more. It has definitely felt like they are pushing these two to be together and I like the slow build for it if that is what ends up happening. Zack unfortunately barely gets any dialogue in this issue, but given what all is going on. With setting up a huge event while introducing new characters into the comic that fans of the franchise will recognize. I’m not surprised that at least one of the main five wasn’t given too much to say.

With all that has happened here in part one of their major event. Mighty Morphin Power Rangers is setting itself up to be a grand epic that is potentially leading up to a large team up to take down one of the best villains in the history of the franchise. Even if you are new to the power rangers, you will find yourself enjoying the series with its dynamic characters that are easy to get attached to.