Why I Miss Comic Book Segregation.

Okay, so before we even start, no, I’m not talking about racial or sexual segregation.

I believe in equality when it comes to all sexes, species, cultures, animals, monsters, Klingons, Kree’s, Jedi’s and even Willie Lumpkin. The segregation I’m talking about is the kind they used to keep comics exciting, thrilling even and is something which seems to no longer exist. Which, you know, is a shame.

Do you remember the days when the X-Men and the X-men alone got to fight Magneto? Remember when the X-Men’s supporting cast only interacted within that specific part of the Marvel universe? There was a time when The Justice League and the Justice Society would only meet up once a year and in between, never the twain would meet. They were exciting times, each comic book universe portioned out to their respective characters. Yet, you know what? They never felt small, never felt reductive or restricted. They were exciting and vibrant places, whether it be the totally different areas of New York occupied by the likes of Spider-Man, Heroes For Hire and the Fantastic Four, or the furthest reaches of space with Adam Strange or the Green Lanterns.

So when elements of these respective universes would, inevitably, cross paths it was something special. It tickled all those fanboy parts other comics didn’t reach. When the Avengers fought the Defenders it was thrilling. Crisis On Infinite Earths was beyond mind blowing. Secret Wars made much fan wee leak out. Yet it was also the smaller interactions; when Green Lantern would show up in a Superman comic, or when Spidey would hang with the Human Torch which sent just the same tingle up your spine. It made an already vast comic book universe seem that much bigger. It was worlds colliding but in the smallest, most thrilling of ways. 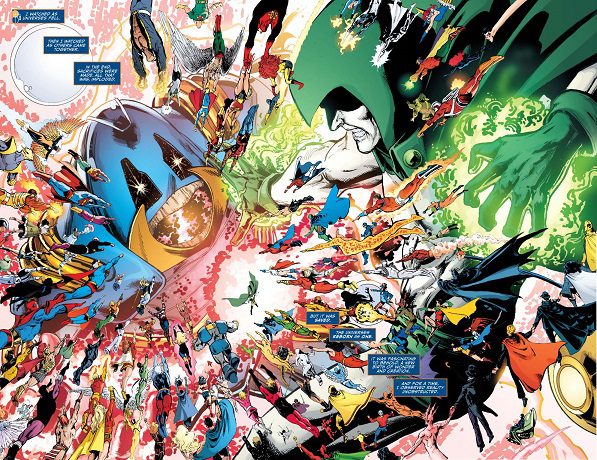 Now it feels like a daily event. There are no boundaries between these respective comic book properties and in the age of the ‘kitchen sink’ comic, where everything but is thrown at you, that thrill feels lost. When Spidey is simultaneously a member of every team imaginable, when Batman pops up in every title, when the X-Men and the Avengers are indivisible, when the Guardians Of The Galaxy are constantly bumming around on earth, you lose sight of the bigger picture, of how expansive the big two’s universes really are.

I know over time that things change and being able to maintain that sense of division is going to become more difficult. Yet there is no reason for it if good writing is maintained. Of course, even with minimal interaction, over nearly eighty years of comics, even the occasional meeting of G’Nort and Aztek are going to add up. Yet that doesn’t mean that these interactions can’t be made special, can’t be something to look forward to.

Few heroes have had so many interactions as Batman and Superman, yet since Rebirth, their frequent appearances in each other’s respective titles have felt important. Why? Because each of their current titles are so strong. When Lois discovered Bats moon Bat-cave in Superman #5, it was genuinely exciting. When Robin and Superboy interact and share a title, it’s fun and thrilling and it’s all because of good writing in Bats and Supes respective titles.

In concentrating on specific areas within these massive universes, you get a more focused result. When you are trying to incorporate multiple characters, worlds, races, dimensions and histories all at once, something is going to get lost. It’s time to put baby in the corner. 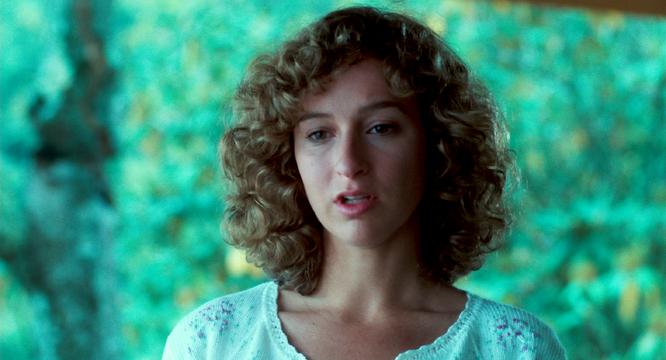 Marvel would benefit greatly from segregating their characters again. Avengers over here, X-men over there and space-faring heroes back in space where they belong. DC too would do well to keep their heroes divided a while longer too. Team books, of course, are the exception, but these too only really work based on the number of high profile heroes involved who have their own titles. In turn, the quality of these titles vastly improves the quality of the team books. When you have strong, well-written characters relating to strong, well-written characters, you really can’t go wrong. You could commit a four issue mini-series to the Avengers baking a cake if it is well written enough and features strong, defined characters. Sure, if you include Thanos messing with their ingredients and fiddling with the oven temperature it’s going to bring in a few more fanboys/girls, but the core of it will still be strong.

So, yes, maybe I’m sounding like an old and stale fart, but I also think that the general quality of the big two’s comics is reflective of too much, too often. It is time to step back and respect the history and depth of these characters again by giving them space to breathe, to grow. 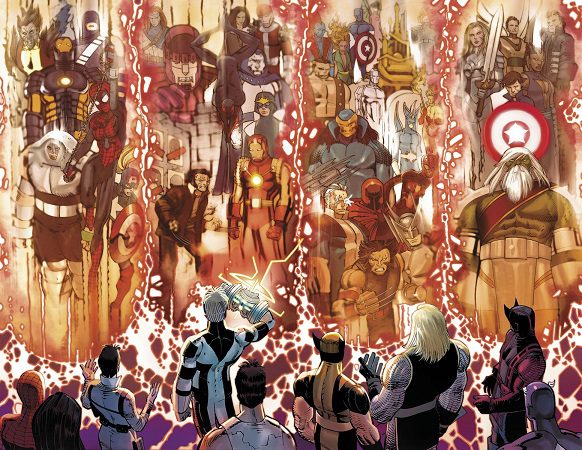 The next time I see Spider-Man bump into Dr Strange I want it to make me feel like it’s something special. When next Green Arrow crosses paths with Hawkman, I want it to be something important for the characters.

It should feel like two worlds colliding, even if just for a moment.