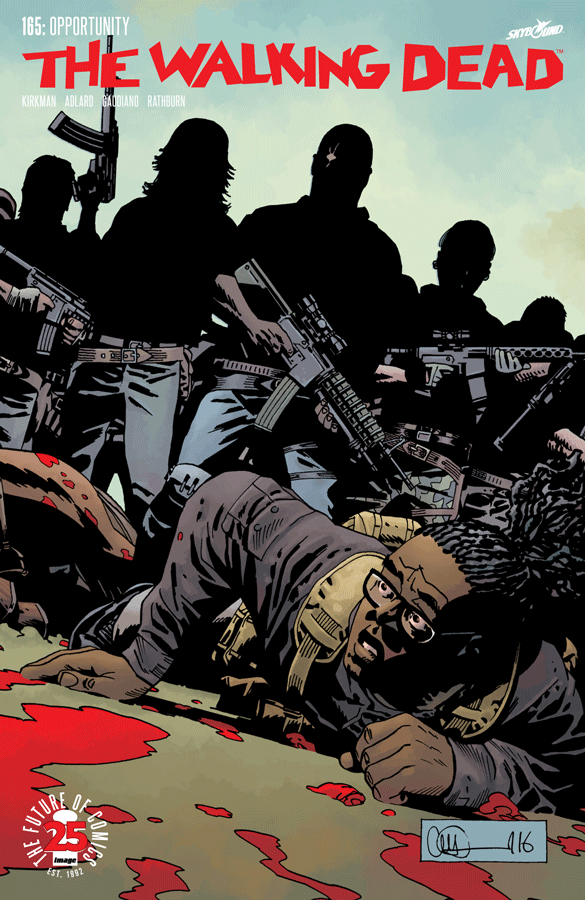 Rick and Negan are hiding out in Alexandria waiting for the massive zombie herd to thin, while Andrea, Dwight, Michonne, Heath, Dwight, Laura, Jesus, and others try to divert the walkers. In this issue, Rick’s and Negan’s bromance continues to kindle, as they have to work together to get out alive. This arc is all about surviving the aftermath of the Whisperer War, and Robert Kirkman does a good job building the intensity from issue to issue; as the pacing picks up some in this issue, it’s starting to feel like there’s no hope for the group. At this moment, all characters—from Alexandria, the Hilltop, and the Kingdom—have to be brave and fight. And no matter how long they’ve know the rules, someone can get bit, because the rules aren’t set in stone in this world; they’re fluid and constantly changing.

Although there are a few expected storylines—it seemed about time for the Saviors to make their move and for someone to find out about Eugene’s radio—the issue is still strong. Kirkman does a good job of switching between the major groups to keep readers wondering what will happen next. With the Saviors finally swooping in, the question on everyone’s mind is WWND: what will Negan do? Is his “friendship” with Rick legit? Or is the master manipulator doing what he does best? Rick tells Negan his bar for friendship is low, but deep down Rick could probably let bygones be bygones at this point, which could be a mistake. I’m still very interested to see what comes of Eugene’s radio after Siddiq discovers it and the person behind it this issue, and I’m hoping who’s left of the group sets out on the road again. The group has been in the same locations for a long time, and a change of scenery might be in order. Kirkman also ends the issue on a nice, but unfortunate and unexpected, cliffhanger. As we find out, not everyone has plot armor. I’m interested to see what he has in store for the story after this major plot device.

The flow of this issue is perfect. Charlie Adlard offers a lot of diversity throughout, switching between the size of the panels to add variety. He brings back the sixteen-panel grid that we saw throughout the Whisperer War for an entire spread, showing just how stressful the situation is. He also showcases his amazing talent through some great full-page panels and spreads. The full page of Eugene as he looks out over the walkers falling off the cliffside (featured in the previous pages’ spread) into the ocean is great. Andrea looks on suspiciously, and perhaps judgmentally, while Eugene notes how beautiful it is: “It’s like a machine built by nature to save us. Just remarkable.” His cover this month is pretty literal; it features Heath being captured by the Saviors, which occurs in the issue. Although we know it’s the Saviors, Adlard chooses to feature them as shadows in the background to add a bit of mystery and intrigue.

The pacing picks up a bit in this issue, as the situation with the horde of zombies and the Saviors continues to heighten. Will Negan side with the Saviors and take his rightful place as their leader, or will he fight alongside Rick? We’ll find out soon. After what happened in the final page of this issue, I can’t wait for issue 166!