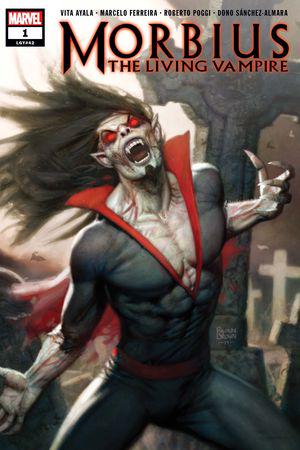 Morbius has been green-lit for a movie and Jared Leto is slated to portray the living vampire. Marvel Comics decided it was a great idea to release a new Morbius comic before Sony releases the movie. The one thing they have in common is that they are bad ideas.

Morbius himself isn’t a bad sidekick or supporting character, he just isn’t worth his own comic unless it’s deep-rooted into horror. This issue tries to adapt him to a setting that isn’t natural for him. From the start to finish the issue felt uneasy and unnatural.

The comic itself feels like one bad mistake after another. From the main villain being a D-list nobody, to a bunch of vague science ideas and just a jumbled mess of everything, you would think the comic was written by google auto-fill, not by a person.

Vita tries to write a vampire into a superhero story and it’s not good. The biggest weakness is trying to keep the reader vague to some key points but that vagueness works against her. There’s a formula that does something evil but it’s also good but no one has described what it does. However, this formula sets everything in motion.

Marcelo’s art feels repetitive once you go past a few panels. It gives you a sense of déjà vu as the first few pages look the same. Everything starts feeling the same as the tricks and characters are overused. Shadows are overused trying to build suspense and the characters started looking the same from panel to panel. As the issue only has two settings, it’s hard to not make the background look the same but with a bad perspective, it becomes redundant quick. Overall Morbius is not a good book. Trying to find redeeming qualities in it was daunting and unaccomplished. Every aspect of it felt rushed as if trying to maintain a deadline or to keep the rights to the character. I do not see this comic sticking around for long and sadly there is a reason the Legacy number for Morbius hasn’t gone past 50.

Have you seen this:
THE ME YOU LOVE IN ThE DARK # 1 (REVIEW)