Detroiters, it is that time of year again!! This weekend, May 18th-20th, will be the return of the Motor City Comic Con taking place at the Suburban Collection Showplace in Novi. Since 1989, Motor City has been bringing the biggest collection of comic book and pop culture fandoms to Metro Detroit. This three day event brings artists, celebrities, creators and more to Michigan for some serious geeking out. 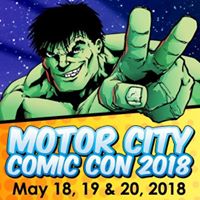 I was first brought into the fold about Motor City by my dear friends April and Jason; I’ve been hooked ever since! In the two years that I’ve gone I’ve gotten to see and have pictures with one of my all-time favorite sci-fi actors (Brent Spiner of Star Trek: The Next Generation) and the man that brings life to the audiobook versions of The Dresden Files by Jim Butcher (Buffy the Vampire Slayer’s James Marsters). Beyond the interactions with celebrities, I’ve been able to see the completely amazing creativity of many of the writers, artists and creators in the Artists Alley.

Motor City Comic Con 2018 is looking to be another spectacular affair this year. Celebrity guests include Val Kilmer, Wallace Shawn, William Zabka (all notable for appearances in many 1980s blockbusters), Cress Williams, China Anne McClain, Nafessa Williams (stars of The CW’s newest hit comic book series Black Lightning), and a quartet of actors celebrating the 40th anniversary of the Superman: The Movie (Aaron Smolinski, Jeff East, Johnny Whitworth, and Margot Kidder). For the comic fans, there are many people in attendance including Denys Cowan (Batman’s Blind Justice arc), Frank Quitely (the Millarverse’s The Authority and Jupiter’s Legacy) and local talent like Katie Cook (IDW’s My Little Pony: Friendship is Magic).

If you are anywhere near the Metro Detroit area this weekend come and check it out!! I will be there all weekend reporting on the events, people and more from this great convention. Show Times are Friday from 12:30PM-7PM, Saturday from 10:30AM-7PM and Sunday from 10:30AM-5PM (advanced ticket holders get in 30 minutes earlier). Tickets are $75 for the whole weekend or get individual day passes ($25 for Friday, $40 for Saturday and $30 for Sunday).