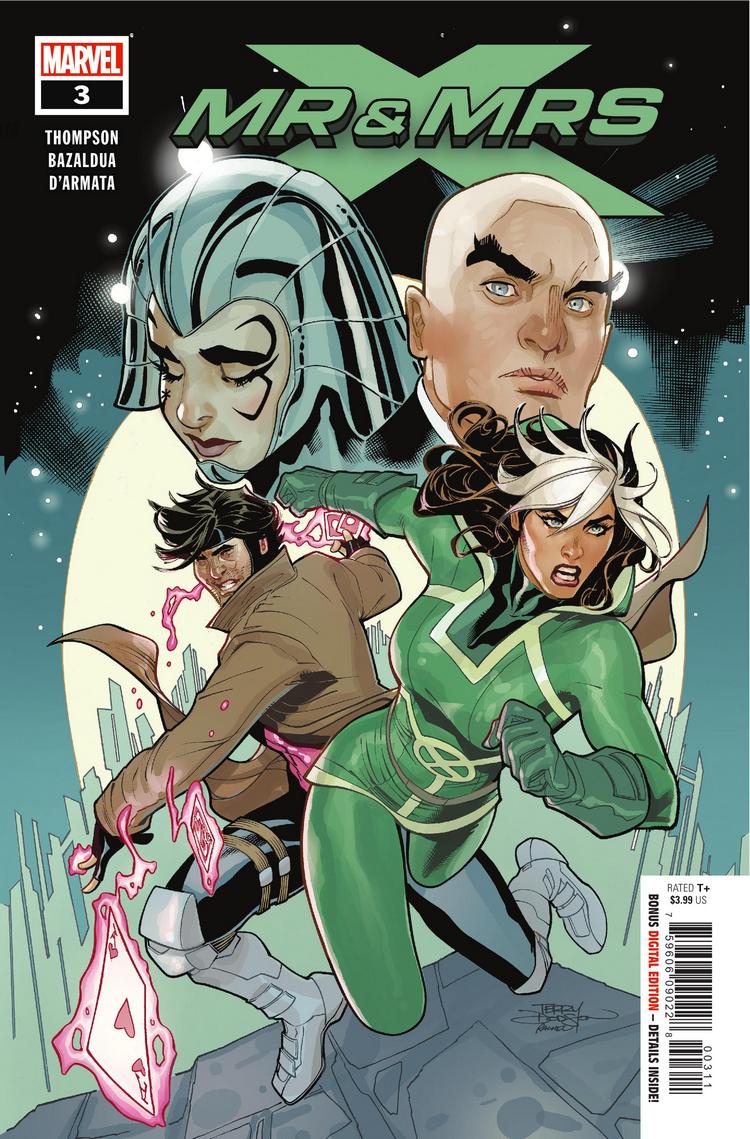 First, I’ll admit my prediction about Deadpool and the egg in my Mr. & Mrs. X #2 review was slightly off. We found that out pretty quickly in Mr. & Mrs. X #3 when it was revealed the egg is not a Rogue clone. We also found out why the heck Professor Xavier and Lilandra were on the cover of this issue.

The being in the egg, who calls herself Xandra, is their genetically engineered child. And she’s kind of VERY powerful. This all explains why the Shi’ar are after her.

She’s also REALLY young Xandra, too. When she appeared in Mr. and Mrs. X #2 she looked maybe 10 years younger than Rogue. In Mr. and Mrs. X #3, it seems like she’s barely over 10. Xandra is probably 14 but is about as naïve as a six-year-old. She’s immensely powerful but probably won’t be much help throughout. Maybe, MAYBE at the absolute last minute.

But for now, it’s all on Gambit and Rogue. Deadpool is gone. Though I expect he’ll factor in at the very end of this adventure, right now it’s the new married couple that has to figure it out.

And when I say they’re on their own, that’s not an exaggeration. It’s bad enough they have to do this on their honeymoon, but let’s forget that for one sec.

Rogue and Gambit have been given little to no direction from the get-go. Kitty knew exactly what the egg was from the start, and obviously knew how powerful Xavier and Lilandra’s offspring could be.

How in the world do you not tell Rogue and Gambit EXACTLY what they’re dealing from the jump? I know Kitty’s had a lot going on in her life recently, but that’s just bad leadership, cut and dry.

Oscar Bazaldua art isn’t necessarily my style – it’s a bit too soft – but I did like Gambit and Deadpool’s hallway action scene. And Kelly Thompson did a great job with their back-and-forth in that scene.

Thompson has done well with Deadpool as a secondary character, but that’s nothing when compared to what she continues to do with Rogue and Gambit. She just gets them.