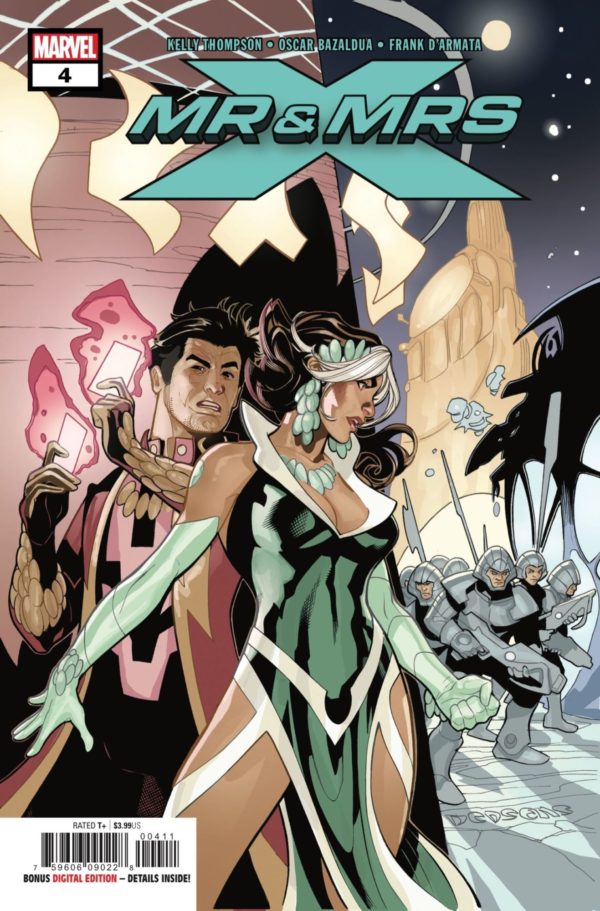 Hats off to Kelly Thompson with Mr. & Mrs. X #4. From what I could tell, she perfectly addressed a major, reoccurring social issue within the primary storyline without the subtopic taking over completely. Plus, Thompson is far from on the nose with her social awareness. I firmly believe that’s the sign of a truly talented writer.

So Xandra kind of created the issue by telling Rogue she can “fix” her powers. When I first read it I thought Xandra would make it so Rogue could actually control her powers. That could be the case, but Rogue makes it seem like Xandra’s will alter he in a manner that could seriously mess with Rogue. Not only did I not realize that at first, Gambit didn’t either. He just sees it as a chance to enhance his life and Rogue’s. He is not aware of the repercussions.

Now I could be off on this, but this discussion felt like it was intended to serve as a metaphor for abortion. Rogue initially sees it as a great option but recognizes the damage it could cause. Gambit only sees it as a positive and upsets Rogue. Thankfully, he recognizes this is a decision she has to make, even though it impacts them both. Because powers or not, Gambit is sticking with her.

Such a subtle allegory, but very effective in what it’s trying to teach. Because I may not have recognized the specific social issue it directly addressed at first, but I got the overarching message right away — which is all that matters. Can’t compliment Thompson enough for that.

The rest of the story itself was pretty good, nothing all that mind-blowing; a solid issue.

Now, as much as I like the two-page spread where Rogue, Gambit and the Star Jammers take on the Shi’ar imperial guard, my one knock on Mr. & Mrs. X #4 is the art.

Actually, I haven’t totally loved it the entire series.

Both Oscar Bazaldua and Frank D’Armata are great don’t get me wrong. But Rogue looks like she’s 16 and Gambit looks 30ish, so that’s kind of creepy. On top of that, Gambit’s features are so soft. That just isn’t him. And the colors are far too bright, especially for space.

Their art just isn’t my cup of tea, that’s all. Certainly not enough to turn me away from the stories in characters, but definitely not enhancing my experience. If Thompson continues with Mr. & Mrs. X, or whatever the title turns into next, I wouldn’t mind if someone else handled the artwork going forward.

Lastly, quite the cliffhanger. Thought Gambit was the one who’d be in dire straits next issue.