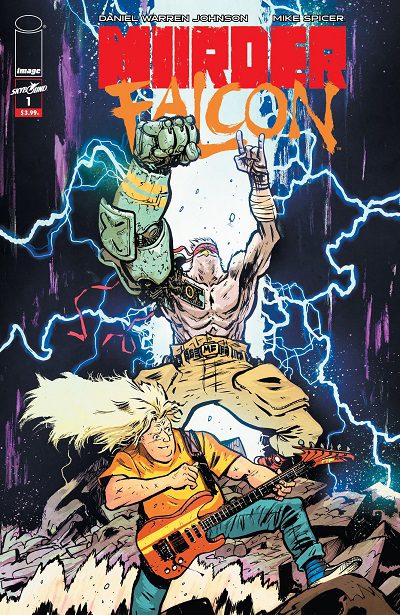 Daniel Johnson has brought us a new series and after completing the first issue of Murder Falcon, it’s clear that there are quite a few layers beneath this wild and crazy comic about a rock guitarist and a giant falcon fighting alien monsters. When you start the issue, you’re thrown in quickly, meeting Jake and his pal Murder Falcon as they try to save a city from an attack. But then we’re given a bit of a backstory on Jake. He’s struggling in life with some personal matters that aren’t explained exactly but very much hinted. He’s given up playing guitar and just seems to be finding it difficult to go through life anymore. This all changes though once a creature tries to attack him and Murder Falcon appears. Yea, that’s his name and it definitely is something that adds to the ridiculousness of how Jake’s guitar playing is what helps power his new friend to fight these things.

The comic thrives on being as wacky as it is but the quiet moments are where the real heart of the book lies. With a new friend in his life, Jake seems to find a new purpose to play and hopefully, this will help him move forward in his life now as we see him thinking about a past lover in his life. These were definitely my favorites parts to read as it shows that when you’re going through something hard, you just need to be able to open yourself up to someone to get you to a better place in your mind.

The art here is very enjoyable and the style really blends well when things get nuts. It reminds me a bit of an 80’s style and you’ll find that it compliments the tone very well here. Sure, nothing here is super detailed but the illustrations are still done so well that you always get how Jake is feeling in all of his situations throughout the issue. Murder Falcon tends to have this same look on his face the entire time but I found that to be quite funny as I read the issue. The coloring is really clean here even with the grungy like style and nothing really takes you out of it as you turn the pages. Murder Falcon #1 starts off well and doesn’t waste time with its setup. The method of how Murder Falcon has to fight may be the only thing that readers find odd but it’s clear that there is a very human story here and the alien-fighting is just the fun part of the ride.