My Heroes Have Always Been Junkies TPB 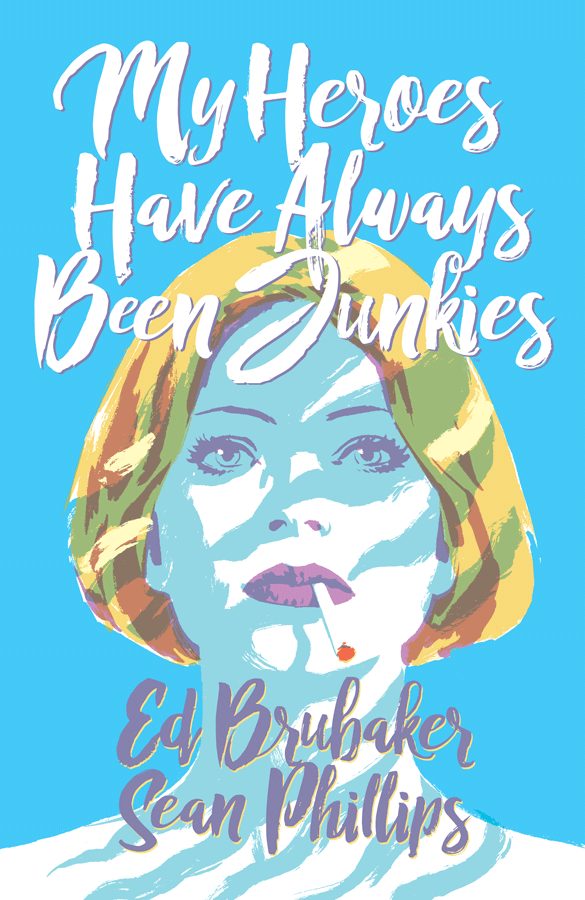 My Heroes Have Always Been Junkies TPB
Image Comics

The creative team of Brubaker and Phillips has given rise to some of the best Indy comics within the last decade. Their work on Fatale and Criminal is transcendent of the Noir genre, with each project garnering awards and accolades. This duo has cemented their legacies and their name on a book alone sells. So I thought this latest outing would be a sure-fire winner. What I found instead was an emotionally complex story of betrayal and self-reflection.

I’m not above admitting that personally, I wrestled with addiction for almost a decade. Various drugs and booze were my weapons of choice when it came to self-medicating. I’m not proud of my time as an addict, I saw and did things that I would give anything to forget, but the life of a junkie is one that logic does not dictate. I was one of the lucky ones who made it out of the drug-fueled haze alive. In February I will celebrate 12 years sober. To say that this material hit close to home is an understatement.

The story itself is not a unique one. Ellie is in rehab for her own addictions. Surrounded by those that are seeking a better way, yet she has no interest in recovery. Ellie is the worst kind of addict, not in the sense of the narcotics that she uses, but in her mindset and attitude that she likes being an addict; it’s what she’s good at and there is nothing that can change her. She uses the people around her just as much as she uses various substances to get what she desires.

In the character of Ellie Brubaker creates an irredeemable protagonist that we are forced to watch spiral deeper into her own self-centered destruction. There is one big problem though, Ellie’s really good at dragging everyone down with her… and she knows it. She befriends and then manipulates fellow addict Skip into her web of lies and deceit. Before Ellie even says hello she knows in her mind that she will use this man for her own purposes, and that purpose takes on an insidious end at the conclusion of the story. There is a lot more to Ellie than we realize. She has a reason to her madness, but even as the climax of this story comes and goes, it doesn’t make us care for Ellie any more or less. In fact, it may push some readers to downright despise her.

The trouble with this story is that by centering everything on such an unlikable character, the reader never endears themselves to Ellie. She is a rotten shit and she makes no apologies for her actions or attitude. She is just another useless junkie and knowing her backstory doesn’t sway the audience to her plight. She deserves what she gets because she is so unabashedly pushing for chaos and self-destruction. Is Ellie a sympathetic character? Sure. Is she a character that even remotely tries to redeem herself? Fuck no. And there is the rub. By the end of the tale you want to see Ellie get what’s coming to her, but there is no clear-cut resolution. There is no resolve. It’s just Ellie and the wake of emotional, mental, and physical pain that she leaves behind her.

I can’t speak to Ed Brubaker’s personal experience or history with addiction. But as someone who lived a life of a user, I can tell you that his grasp on the reality of addiction and rehab is flimsy at best. The moments that are supposed to carry the heaviest of emotional impacts for the reader are the ones that come off as the cheapest for me. Ellie’s flashback to watching her mother shoot up as a child and fantasying the moment lacks the emotional punch that was intended. Brubaker almost seems to be lost in the romanticism of the drug culture. An outsider looking in and it’s because of that feeling that everything that he writes about rehab and addiction ring hollow.

As far as a comic goes this is a complex and interesting read that I’m sure will satiate the fans of Brubaker and Phillips, but as a stand-alone installment that is trying to understand the world of a junkie, this title misses the mark. It’s a well done story, but for those of us that have lived the reality it is almost insulting.

There is nothing romantic about being in the clutches of drugs and alcohol. Not when you’re in the eye of that storm. It may look like a party on the outside, but inside it is a non-stop life of self-inflicted pain and endless yearning to be free of your own identity. There is no reprieve, there is no rest, and there is no escape unless you’re willing to sacrifice everything to get better.

This was marketed as a “Criminal Novella” and in the universe of that comic series I’m sure that the actions and characters that are presented here have far more depth and complexity, but as a stand-alone offering, this book has its own issues to deal with.

I just want to close this review on a personal note to others out there that might be reading this and dealing with their own addictions. If you feel that you have a problem with drugs or alcohol please seek help. There are a number of groups and locations that are ready and willing to help. No matter how bad you are they can and will help. No one is strong enough to handle life all on their own. Get help. Try the National Drug Helpline at 1-888-633-3239.

Don’t wait until it’s too late. I have lost friends and family to the monster known as addiction. Don’t put your loved ones through that kind of pain. Heal yourself. You CAN do it. I’m living proof that it can be done.