The new God of War Trailer is here

Sony surprised fans by releasing a new trailer for the upcoming God Of War game, which now has an April 20th release date.

Living as a man outside the shadow of the gods, Kratos must adapt to unfamiliar lands, unexpected threats, and a second chance at being a father. Together with his son Atreus, the pair will venture into the brutal Norse wilds and fight to fulfill a deeply personal quest. 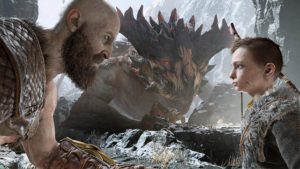 This version of Kratos is a significant departure from his angrier hellbent persona we knew in previous games. This time around Kratos appears much older, has a beard and has a son. Many fans had speculated as to how this game would connect the other games in the series, but it seems this trailer hints that timeline a bit more. In the trailer Kratos’s past is referenced on more than one occasion.

“I know you are a good, not of this realm, but there’s no mistaking it. He doesn’t know does he? About your true nature, or his own.”

This time around Kratos will be in the Norse “Realm”. No word yet on whether any of the Norse gods such as Thor or Loki will be making an appearance. I wouldn’t doubt it though. Check out the new trailer below.

god of war kratos norse
Add your voice!Join the conversation on Discord...
Join Our Discord