Thanks to Empire Magazine, we have a new picture of Hellboy and some new information from director Neil Marshall. Check them out below!

“It was always a case of, ‘When in doubt, go back to the source material.’ Some of the stuff is pretty sick. More violent and more bloody. We weren’t making it with handcuffs on.” 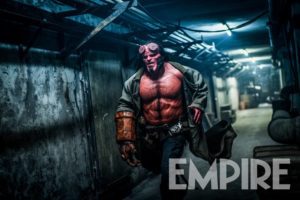 ‘Hellboy’ is set to release on April 12, 2019. The film stars David Harbour as the titular character and Mila Jojovich as The Blood Queen. Daniel Dae Kim, Ian McShane, Sasha Lane, and Brian Gleeson also have roles in the film, which hails from ‘Game of Thrones’ director Neil Marshall.