The new Teen Titans Go! To The Movies Trailer has arrived and shows Will Arnett voicing the character of Slade Wilson, also known as Deathstroke. Arnett goes from voicing Batman in The Lego Batman Movie to the Titans arch-nemesis in this upcoming animated film based on the popular series on Cartoon Network.

It seems to the Teens that all the major superheroes out there are starring in their own movies-everyone but the Teen Titans, that is. But de facto leader Robin is determined to remedy the situation, and be seen as a star instead of a sidekick. If only they could get the hottest Hollywood film director to notice them. With a few madcap ideas and a song in their heart, the Teen Titans head to Tinsel Town, certain to pull off their dream. But when the group is radically misdirected by a seriously super villain and his maniacal plan to take over the Earth, things really go awry. The team finds their friendship and their fighting spirit failing, putting the very fate of the Teen Titans themselves on the line.

The film appears to be very self aware, much like the animated series. From taking shots at previous DC titles to hilariously mistaking Deathstroke for Marvel’s Deadpool.

Funny enough, the film is a bit similar to Deadpool in the sense of they are both satirical superhero comedies… and of course kids can actually watch this one.

The film seems to hold nothing back even taking shots at the current DCEU universe. It’ll be interested to see what all this film references. 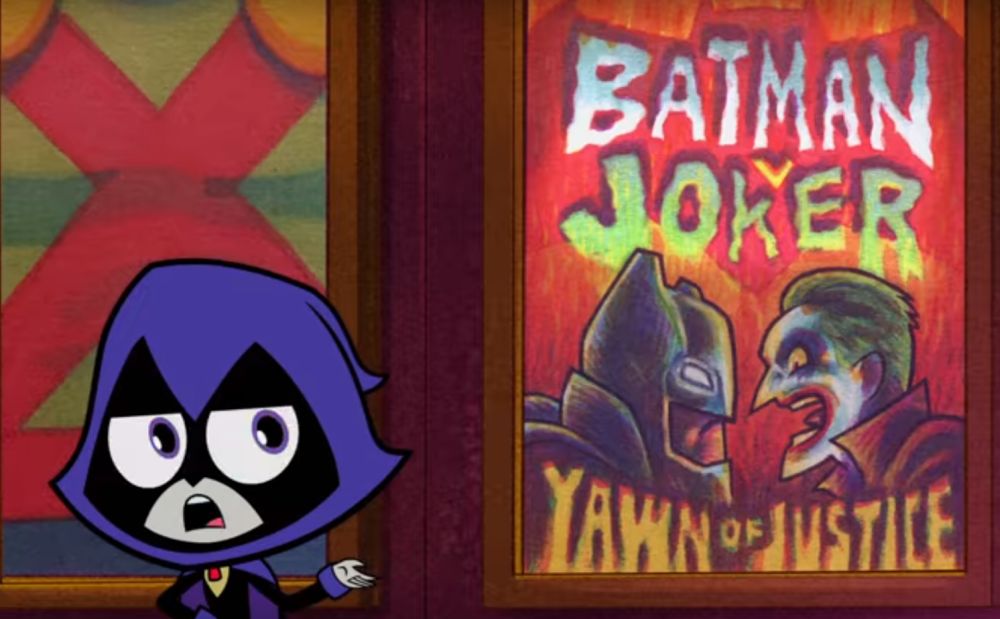 In a previous clip, the team are also shown being mistaken for “The Mighty Avengers”,

The trailer also shows off Superman, Wonder Woman and Green Lantern. As previously announced, Nicolas Cage is the voice of Superman, which may have been long overdue, as Cage was originally suppose to play the iconic hero in Tim Burton’s Superman Lives in the early 90’s before it was cancelled.

One of the Green Lanterns, John Stewart, voiced by rapper Lil Yachty, makes an appearance in the trailer and even mentions the 2011 Green Lantern flop featuring Ryan Reynolds. “There was a Green Lantern movie… but we don’t talk about it.” I’m sure I don’t have to explain why this is funny.

The film look looks like it is going to be packed with fun-filled moments and laughs for kids as well as fans of DC comics. Also from the looks of it, it appears dozens of heroes and villains from the DC roster make an appearance of some sort.

Another surprise not shown in the trailer is the upcoming voice of Batman will be provided by none other than comedian and talk show host, Jimmy Kimmel.

Both Jimmy Kimmel and Will Arnett went back and forth on Twitter regarding the recent reveal:

Dear @ArnettWill, there’s a new #Batman in town (me) and you are what the kids call OLD NEWS… @TeenTitansMovie #TeenTitansGOMovie pic.twitter.com/2FXkaOCznq

Dearest @jimmykimmel
Nothing says young like “what the kids call”
I look forward to our inevitable #batman-off
You, me. Anytime. Anyplace. @TeenTitansMovie https://t.co/oQXAv25dMd

Teen Titans GO! To the Movies hits theaters on July 27.