A new webcomic series, coming from one of my spotlight artists, Jamie Jones looks to bring comic fans into the 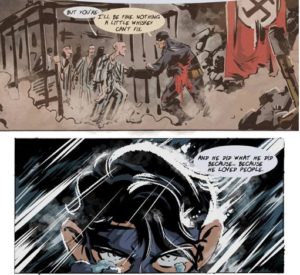 Patreon era. The first issue is up on Jamie Jones and friends Patreon page already! The story jumps back and forth between a group of fellow heroes talking about their friend, The Whisper, and action scenes in the past fighting the ever villainous Nazi scientists. Once again, I can not express how much I love Jones’s art style. It has that classic golden age feel of the strong and bold lines and characters, while still being a part of the modern era with brilliantly colored panels and models.

The concept of what this story is trying to tell is already amazing to me. Heroes discussing what made a hero who he was, not just his ideology or origin, but how he taught, why he faught and so on. Everything about the hero was his legacy and who will put on that mantle. In an age when DC and Marvel kill off heroes to get a gasp and rise in sales (only to bring them back a year later, sometimes less), it is real refreshing to read a story such as this not just for that spike in issue sales, but just to read it for what it is, the legacy passing on.

Have you seen this:
Marvel Begins to fill cast of Moon Knight

“The Whisper is an ongoing anthology comic that will be released in chapters; each one a self-contained 5 page short story, every month. It’s exclusive to Patreon, meaning this is going to be the only place you can read it! Each short is written by a different writer, with every story drawn by artist and series mastermind Jamie Jones.”

“As creators, we’re always looking for new ways to tell stories, and we’ve found one in THE WHISPER that we’re very excited about. It’s a book about the concept of legacy in superhero comics. Each chapter, which will all be written by different writers, will focus on a different incarnation of a superhero called The Whisper. Our first chapter, which is also written by Jamie Jones, focuses on the first and second incarnations of the character, and later chapters will see the mantle taken up everywhere from the present 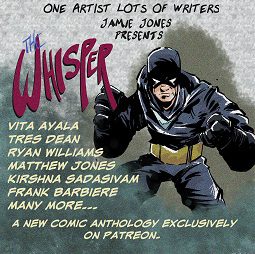 day to the distant future. The complete product, as it gets longer, will form a larger tapestry filling out the history of this identity and the men and women who take it up to fight for the greater good.

● For just $1​ you get the comic. Fully colored. Fully realized.

● For $5​ you get the comic AND bonus material detailing the creative process - which will be different with every story! Sketches, Scripts, Pencils. All of it!

● For $10​ you get the comic, the content and the chance to hang out with the creative team! Google hangout, that is.” 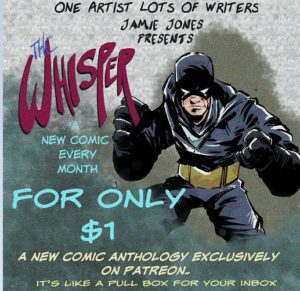 The first issue is on the site for free. Read it and if you like it pledge the amount you would like to each month. The whole system works like the pull box at your LCBS. Before the issue comes out you subscribe to the next issue. You are not charged until the issue comes out. You will then be sent the issue that month as a pdf in your inbox.

The only real difference is you know exactly where your money is going. It is going to the 2 people who make the comic that month. You are directly funding creators to create content for you!”