One of the most exciting times of the year for collectors is upon us once again — New York Toy Fair is this weekend!

Companies across the spectrum are preparing to unveil a jaw dropping, wallet emptying, heart stopping amount of incredible items that will make the collector world’s collective mouths water.

Among those companies, a colossal giant that never disappoints the collector community, DC Comics is bringing out some big guns with their unbelievable reveals for this year’s NYTF! A roster of collectibles well deserving of celebrating DC Collectibles’ 20th Anniversary! 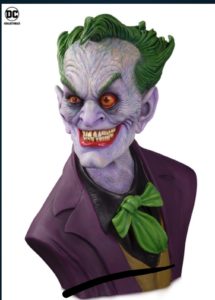 The Joker Bust – by Rick Baker – Easily one of my favorite pieces from the announcement. The Oscar-Winning Special Makeup Effects Artist delivers a devilishly twisted life sized Joker Bust so eerie it would give Pennywise nightmares and is sure to quickly become aspirations of Cosplayers across the globe. Baker’s Joker is a perfectly demented amalgamation of all of the best known previous iterations of the Clown Prince of Crime. 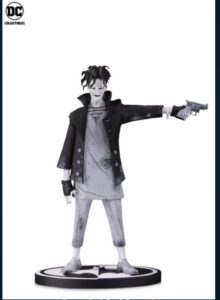 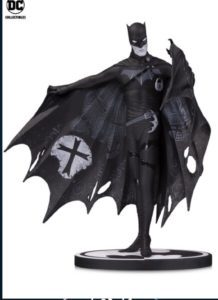 Batman: Black & White Batman and Joker Statue set – by Gerard Way – My Chemical Romance front man and mastermind behind DC’s Young Animal delivers his stylized take on the Dark Knight of Gotham and his arch nemesis the Joker in a black and white palate that magnifies every detail that Way embodied into them. The statues stylized appearance are likely to be sought after by not only fans of Batman lore, but also the Sandman series as the look of the statues carries many of the same characteristics. 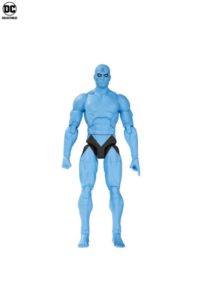 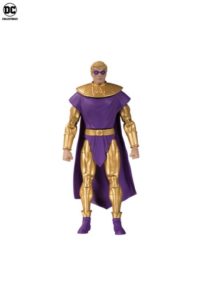 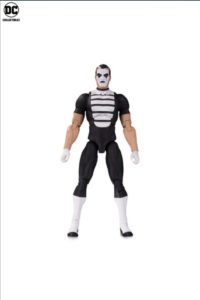 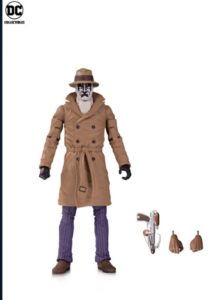 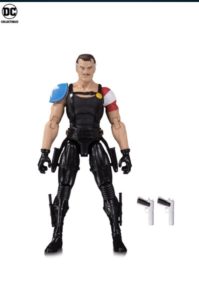 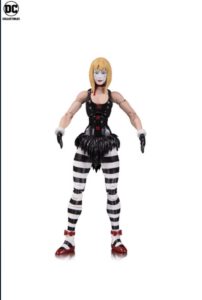 ‘Doomsday Clock’ Action Figures – Based upon the series by Geoff Johns and Gary Frank, the new action figure set includes Dr. Manhattan, Ozymandias, Mime, Rorschach, The Comedian and Marionette with some figures coming with exchangeable hands as well as weapon props. 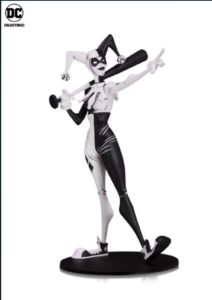 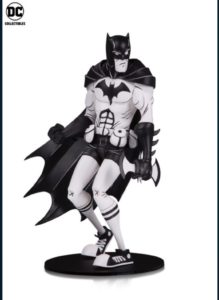 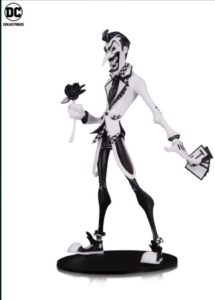 DC Artists Alley – Black & White – Harley Quinn, The Joker, Batman Statues – by Hainanu ‘ Nooligan’ Salque – These stylized renditions of some of Gotham’s most famous inhabitants will be a wonderful add to any Batman, Harley, or Joker collector’s shelf. The unique comic appearance features embellished features, and an affinity for Converse style footwear. The Joker statue in particular contains a lot of fun detailing from his hyper pointed nose, to his black rose and trademark playing cards in his hands. 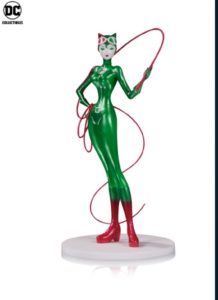 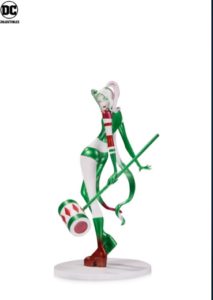 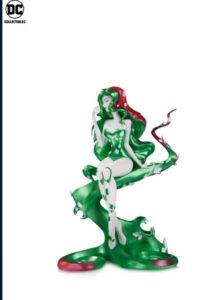 DC Artists Alley – Holiday – Catwoman, Harley Quinn, Poison Ivy Statues – by Sho Murase – Adorned in the traditional holiday red and green color scheme, these gorgeous statues of the Gotham City Sirens look so stunning that they would grace any collector’s shelf well beyond the holiday season. The graceful poses and delicate lines of the statues give the appearance of exquisite high end glass figurines. From Catwoman’s trademark whip, to Harely’s playful pose, down to Ivy’s throne made from monstrous vines, these pieces are sure to catch a second look in your collection. 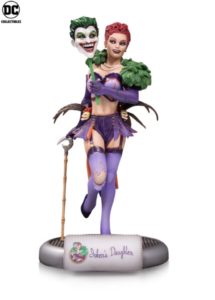 DC Bombshells – The Joker’s Daughter Statue – Possibly the most terrifying yet most enticing piece yet to grace the DC Bombshells lines. The Joker’s Daughter stands in all of her psychotic glory in the amazing styling of the Bombshell line. Complete with her trademark color scheme, her costume containing miniaturized Joker faces to compliment the Joker Face masquerade-esq mask that she carries. Along with her cane and name across her platform, the Clown Princess of Crime is sure to wreck havoc to make her demented namesake proud. 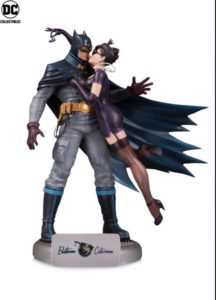 DC Bombshells – Batman and Catwoman Deluxe Statue – This partner statue set pairs up Batman and Catwoman in a playful embrace, with Catwoman, wearing her pearls, trademark mask, and a purple dress, leaps into a kiss on the Dark Knight while dangling a bat logo behind him. Batman, his costume done in a very noir style fashion to fit with the time frame of the Bombshell series, fits into the line wonderfully. This statue is sure to please fans both of the Bombshell line and DC in general. 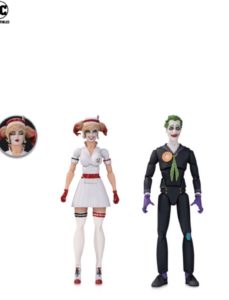 DC Bombshells Nurse Harley and The Joker Action Figure 2-Pack – Taken from the trademark statue and art work, Nurse Harley and her Sailor Puddin are back again! This time coming to the homes of collectors in an action figure format. This 2-pack is a must have for any fans of this duo, and would be a great dichotomy placed next to your Bombshell Deluxe Statue of the kissing scene. 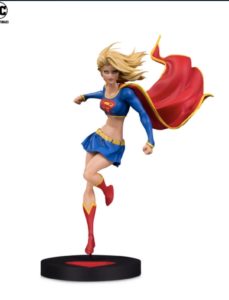 DC Designer Series Supergirl Statue – by Michael Turner – This amazing dynamic pose statue of the Girl of Steel is a perfect addition to anyone’s collection. Featuring Supergirl in a mid-flight pose, the movement and detail of her hair and cape billowing in the wind is masterfully done. Adding this piece to your collection would be nothing short of brilliant and could make for excellent dynamic pictures as the pose makes it appear that the Kryptonian is ready to fly into battle. 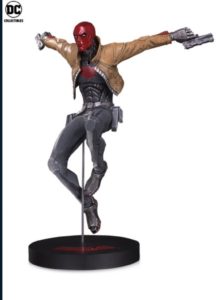 DC Designer Series Red Hood Statue – by Kenneth Rocafort – Sporting his trademark guns and an incredible leaping pose, this piece is quickly becoming one of my favorite Red Hood statues. Wearing a menacing glare on his mask and exceptional detailing through his jacket and armor, this piece is an absolute must have for fans of the Bat-Family. 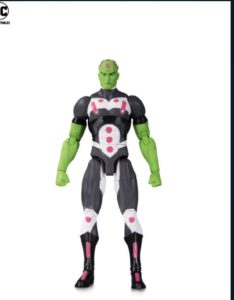 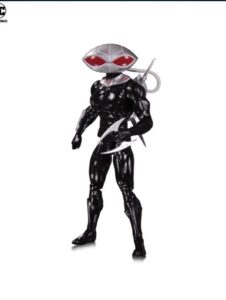 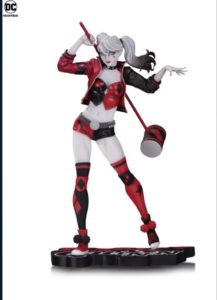 Harley Quinn Red, White, & Black Statue – by Philip Tan – This Harely Quinn statues is one of my absolute favorites. Wielding her trusty mallet and striking a pose that is just as much flirtatious as it is ready to do damage, Harley is truly brought to life with this incredible statue by Philip Tan. Exceptional detailing and brilliant usage of the red, white, and black colorscape puts this piece at the top of my must have list for 2018. 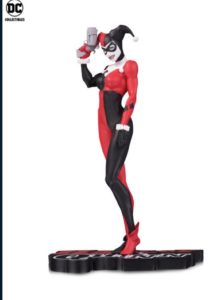 Harley Quinn Red, White, & Black Statue – by Michael Turner – Rounding out the stellar announcements by DC Collectibles for NYTF is a beautiful Harley rendition that truly brings meaning of ‘last by not least’. Adorned in her trademark animated series jester suit with one hand on her hip and the other holding her infamous deadly pop gun, this Harley is truly her animated series counterpart come to life. If you’re a fan of Harley herself, the Batman world, the animated series, or simply, great statues, then I heavily implore you to add this one to your purchase list.

For those of you lucky enough to walk the halls of New York Toy Fair, make sure you visit the DC Collectibles Booth and get an opportunity to see these amazing pieces in person. For the rest of us, time to start saving up our collectible funds, because the out of this world work delivered by DC Collectibles this year is going to have quite a few pieces at the top of everyone’s lists this year. View the video link below to see another look at these incredible items.