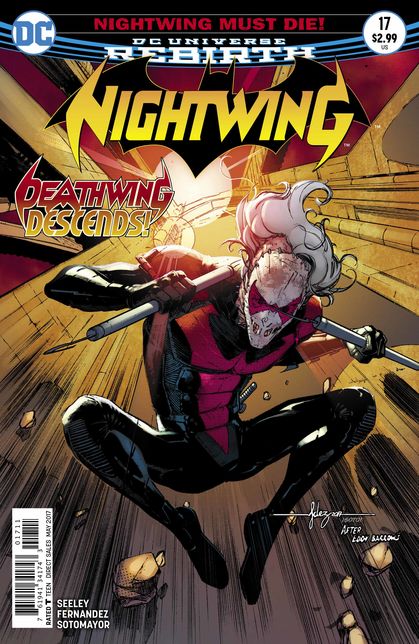 The setting is the Bay of Biscay where Nightwing and Robin are cruising over the waters in the Batmobile that the former had borrowed from Batman. Resentment fills the air as they get out to stretch and spar. They argue about who will be the heir to the cape and cowl of Batman and take up his namesake to continue fighting to save Gotham. They both exchange sharp jabs of ridicule before they arrive at Fontevraud-l’Abbaye in France to look for Nightwing’s missing girlfriend who may be pregnant.

It’s nighttime and inside the Abbey, Robin and Nightwing find the tomb of Richard I, but it is empty until Deathwing emerges from it and it’s a two on one fight, until Deathwing manages to put Robin in one of the coffins. Nightwing’s forehead is sliced open by a swipe from Deathwing’s knife and time slows down briefly as Nighwing stares at the drop of blood about to release from his forehead not knowing if this is a dream or nightmare. Minutes later a new ally appears to help them in their fight against Deathtwing but can the three of them defeat Deathtwing together. The ally’s face resembles that of the foe they’ve been fighting which brings up more questions than answers

Have you seen this:
Batman The Imposter #1 (Review)

Nightwing #17 is a shot of adrenaline. From the initial burst of the angst between Damian Wayne and Richard Grayson, to their encounter with Deathwing whose skills and abilities are very similar to those of Nightwing. The plot goes along smoothly as they try to find Shawn Tsang; Nightwing’s girlfriend; and a subplot about who is the heir apparent to the mantle of Batman. It’s really one sided as Robin is the one who is upset about the idea of Nightwing becoming Batman after Bruce Wayne retires. 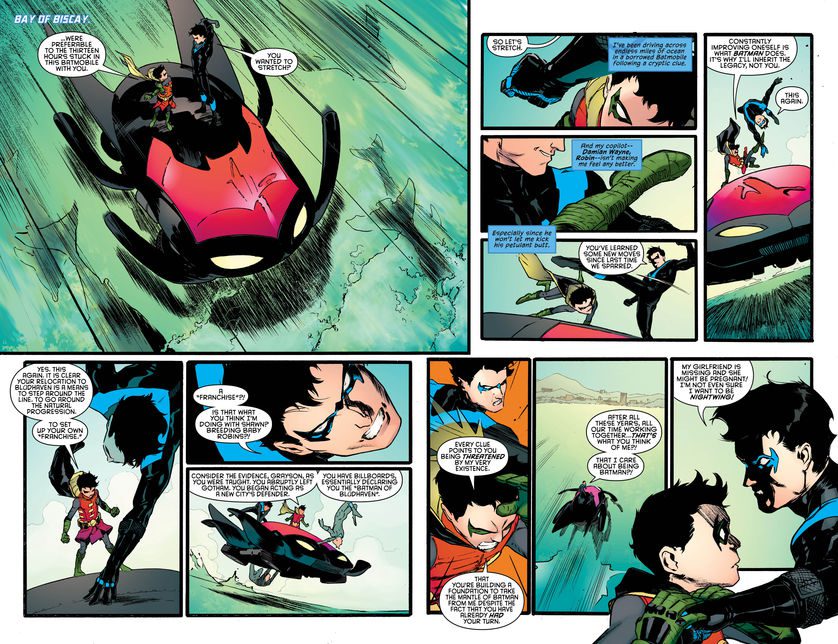 Nightwing is mainly concerned with finding his girlfriend and not at all concerned with becoming Batman at the moment. Tim Seeley’s writing is brimming with excitement and keeps the reader on his toes with such unpredictability that unless you have read the previous issue you really can’t expect what is coming next. It’s usually a “jump the shark”-way of writing when a baby is added to the cast, but Seeley leaves the reader wondering if Nightwing is actually going to be a dad without conclusively stating yes or no. Especially since they are still looking for Shawn Tsang.

Have you seen this:
Batman: Urban Legends #5 (REVIEW)

I really enjoyed the book because anytime a superhero is facing himself in a scenario and is evenly matched, it makes for some great drama. Although the villain in this issue only has similar skills and isn’t the Bizzaro-Nightwing, but possibly something more macabre than just his doppelganger. Javier Fernandez & Chris Sotomayor’s rendering of the nighttime, buildings, and action sequences are done with precision so as to give the book a noir type of feel to it. The issue pulls the reader in with both its art and prose. Nightwing #17 deserves a lot of praise for originality and shying away from some of the pitfalls that beleaguer other comic books. I look forward to finding out what happens in the next issue and to see what has happened to the missing girlfriend.