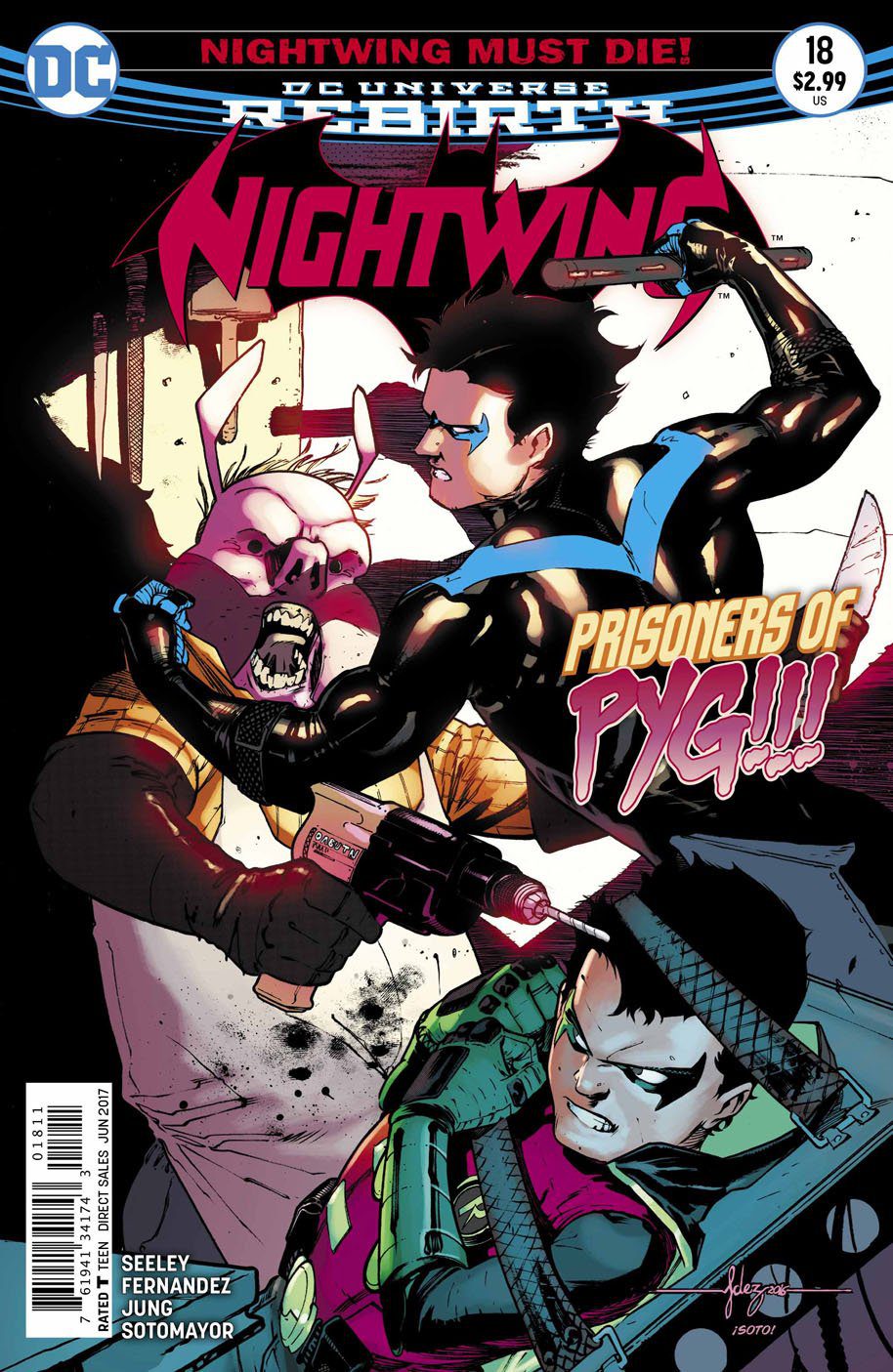 I was a big Batman fan growing up, but I wasn’t necessarily a big comic book reader. That changed when Grant Morrison took over the Batman universe. For me, the crown jewel of Morrison’s run was the first volume of the Batman and Robin series. With Dick Grayson as Batman, and Bruce Wayne’s son taking on the mantle of Robin, I don’t think a better Batman story exists. With a story that introduces the madman Professor Pyg and the overarching villain Dr. Hurt, I adored that series. The only person who seems to have enjoyed it as much as I did is Nightwing writer, Tim Seeley. So now you understand where I come from when I say this is one of my favorite Nightwing issues ever.

Robintron was the highlight of the issue. A child taken by Professor Pyg, and brainwashed to think he’s Robin. Seeing him stop Nightwing and Robin from bickering and remind them that they are brothers, while memories of his own family seeped ou,t was just sad. Within two issues he quickly endeared himself to the reader, which made his death all the more tragic. That moment also highlighted the bond Dick and Damian formed when they were Batman and Robin. Something that gets ignored or at least overlooked by a lot of the Batman writers.

Professor Pyg is a difficult character to write. Grant Morrison really brought the insanity when he created Pyg and no other writer has been able to capture it, but Tim Seeley has come the closest. Pyg’s voice is not quite the same but unlike other writers who took on the character, Seeley made sure to bring back the twisted monologueing that mad Professor Pyg feel larger than life. 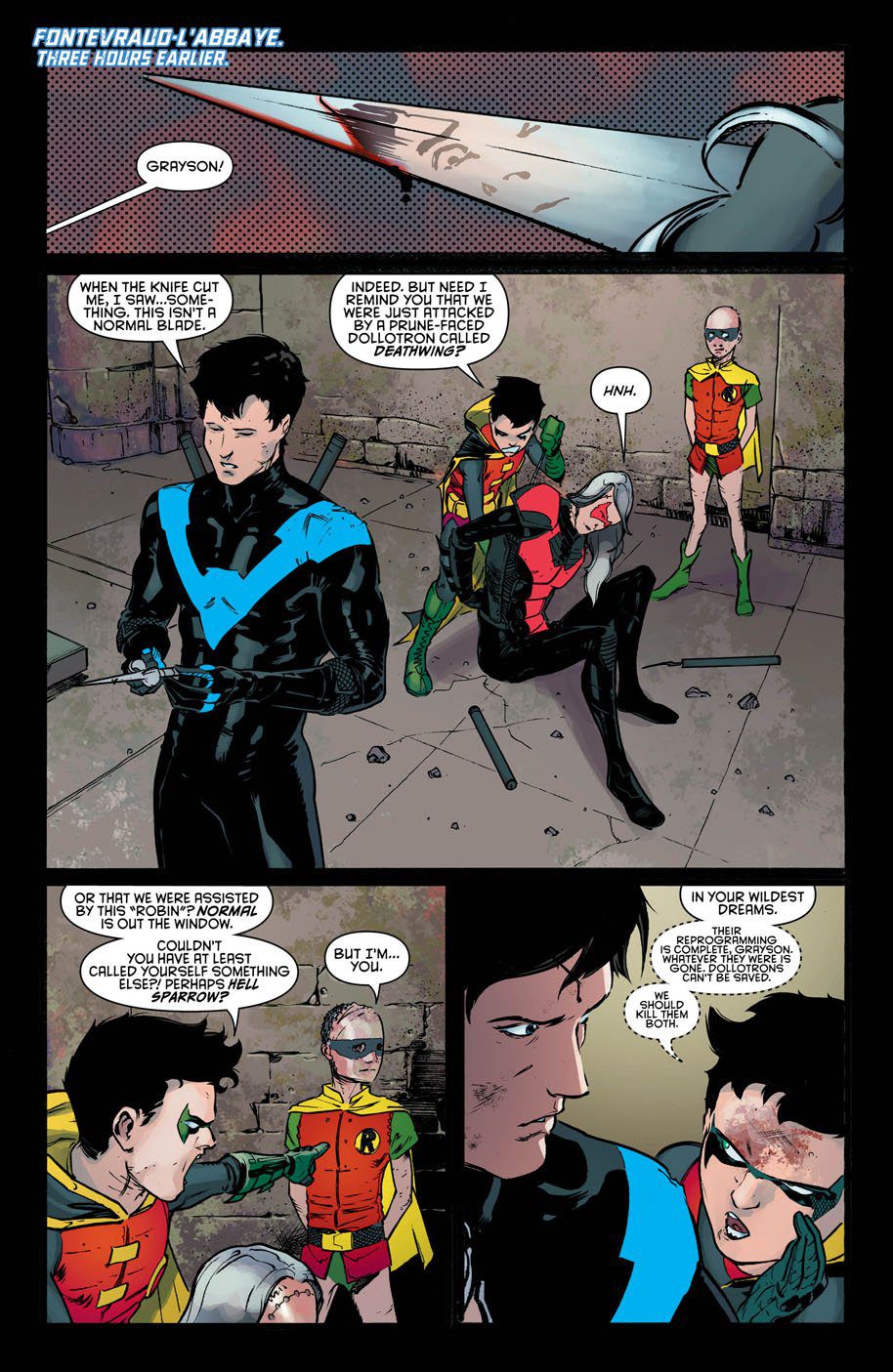 Thanks to Robintron, we got a glimpse into the mind of Deathwing, and it wasn’t pretty. My takeaway from their conversation is that Deathwing is just as in control of himself as Robintron, which makes his evil deeds a reflection of the man and not the brainwashing. Or Doctor Hurt just has a stronger hold on him. The mystery of Simon Hurt in the Batman and Robin series was so interesting. There were times when it was even suggested that he might be the devil. I’m so excited to see what comes of his reintroduction. I believe the last time we saw him he was buried at Wayne Manor, courtesy of the Joker.

Everything about story in this issue was fantastic, but the art did take some getting use to. I always worry when there are multiple artists credited, it usually leads to inconsistent art that takes me out of the issue, but I did not have that problem this time around. Javier Fernandez and Minkyu Jung were close enough in style that I didn’t notice a change. I have to admit though, it took me a while to get use to Professor Pyg being more — plump, but everyone looked pretty good. I didn’t love the art in this issue, but it didn’t take anything away from it.

While reading the last two issues, I was worried we would be stuck with some kind of Nightwing clone as the villain. But so far this Deathwing storyline has blossomed into the next volume of Batman and Robin. I am curious to see if new readers will be able to follow the current storyline, Seeley does seem to be explaining the connections well enough though. I’m just happy the Robin brothers are getting a chance to shine together again.