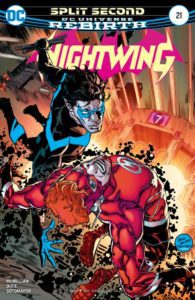 If you were expecting the start of a new story arc featuring Nightwing going up against his old nemesis Blockbuster, then I got some bad new for you: The next story arc will be delayed, but we have a Dick and Wally team-up to hold us over. It may be filler but it’s a fun read if nothing else.

I thought about skipping the beginning of the issue but I need to say it: what the hell? Nightwing stops a mugging and the victim picks up the gun and shoots at the mugger. That lady was a psychopath and Grayson just shrugs it off, luckily Wally showed up. That was a bit weird, but the rest of the issue was a fun little team-up featuring Nightwing and The Flash. Dick and Wally have the best friendship in comics and the writer did a great job of letting their bromance shine. The story as a whole was alright, it’s a filler but the creative team has fun with the characters. Their dialogue was a little clunky at times, but there were some good one-liners.

Timebomb, or as Wally likes to call him Skipper, freezes time to rob people. He was an incredibly lame villain, which I think was the point. He’s just some millennial who got a hold of some alien tech. Still, his dialogue was some of the most painful to read. Knowing he’s meant to sound like an idiot didn’t help. But what matters is the fact that he took the story from point A to point B.

I thought the art team did a good job. It didn’t blow me away but I it worked well, especially the action scenes. My only complaint is that when Wally and Dick are chasing down the bad guy, Nightwing shouldn’t be able to keep up with The Flash. Sure Wally probably slowed down to a crawl for Dick, but at the time the villain could have been a speedster, so going slow was a risk.

The previous story arc with Doctor Hurt received mixed reviews meanwhile I, of course, loved it. So maybe this change of pace in style might be needed for some, and this wasn’t awful. The ending possibly hints at this being a filler arc, which means we won’t see the Blockbuster story for a few more issues. But, I’m not sure.