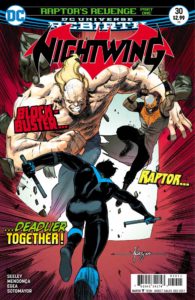 The villainous Raptor has returned to Blüdhaven, and an isolated Nightwing becomes desperate for allies.

As Tim Seeley’s Nightwing run comes closer to its end, we begin to see the finish line for many of his storylines. Raptor, who was the first villain of this Rebirth run, has returned with a new plan and a resentful attitude. Dick points out what makes him so dangerous is how well the two understand each other. Which makes Raptor’s shift to a more unhinged villain a tad confusing. The rapport they both shared is one of the more interesting aspects of the character, so I’m hoping they continue to flesh that out before this arc ends. I do think he’s a worthy opponent for a final boss, and unless something goes terribly wrong I hope he stays a part of Nightwing’s supporting cast. Seeley really played up the class warfare angle that the villain has going on. It always does a number on Dick’s psyche.

What I really liked about this issue is how desperate and isolated it made Nightwing feel. There really was a sense of hopelessness, which made his final plea to Blockbuster understandable. Having read Batgirl last week where Dick and Babs share a kiss, I’m in even less of a mood for the Huntress pairing now than I was before. With that said, I think her character fits well with this superhero-globetrotting spy vibe that this comic book has going. With the reformed villain gang, I do hope that they aren’t tossed aside at the end of this run. When they’re now angry at someone, they’re a really fun group of people. 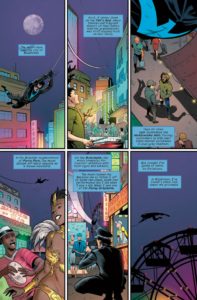 I believe this was the first issue with artist Miguel Mendonca. I enjoyed it quite a bit, I just wish the non-action panels were more dynamic. Most of the panel outlines weren’t anything to write home about, but the characters looked fine. The colors really popped in this issue and were probably the standout of the artwork. There were so much going on in this issue in terms of colors, I thought it was someone knew but it’s still Chris Sotomayor, who has done a great job on this and other titles.

Nightwing #30 really set the table for one last big confrontation between Dick Grayson and Raptor. All the pieces are in place and we will see if Nightwing’s new friends leave him to fail, or swoop in to make him stronger. This was a really interesting start to this story arc.