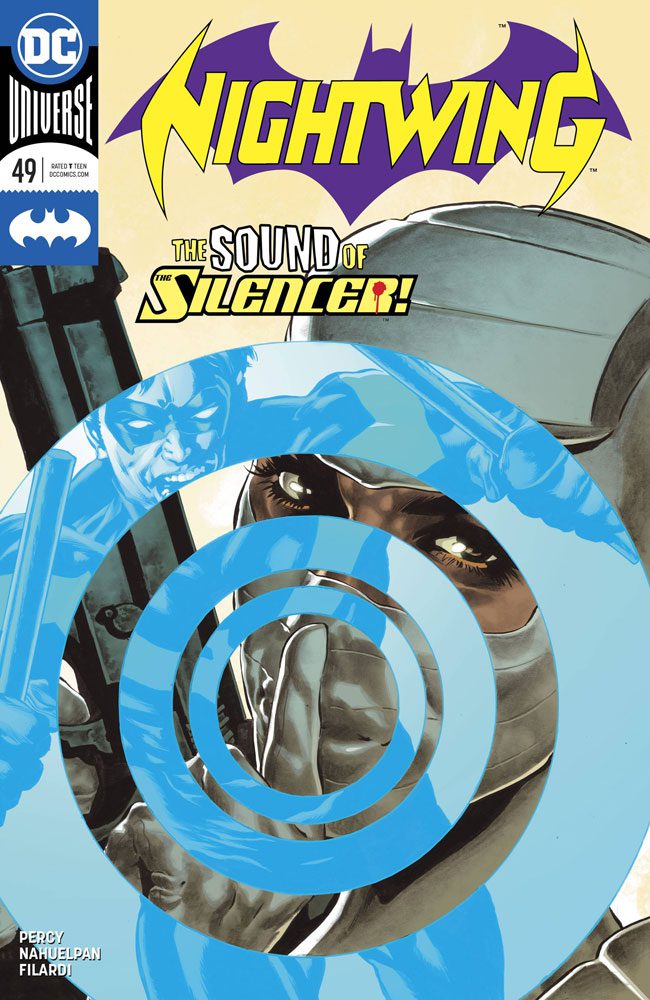 First thing that jumps out in Nightwing #49: the action scenes. Amancay Nahuelpan does a great job with the fluidity of Nightwing’s acrobatics. You could argue The Silencer had even more impressive action sequences, particularly in the opening panels when she saved Nightwing.

Nahuelpan knocks the motorcycle race on the Isle of Harm out of the park. Feels very much like a grade-A chase scene from an action movie.

We also found out The Silencer, who appeared as a potential threat last issue, is actually on Nightwing’s side. Apparently, some under-bosses that have splintered off from Leviathan and hired an assassin named Endgame to take out Nightwing.

Going back to the action, Endgame and The Silencer have a pretty awesome fight in the course of things, too.

Speaking of fights on the side, Professor Pyg has been nice comedic relief in this race. The role suits him well. As dangerous as Pyg is, he’s just so out of his mind I have a hard time taking him seriously.

Flamingo is also involved, but I wonder if he’s set to play a bigger role in things. I may be putting too much into this, but the way he’s interacted with the other characters, and where Nahuelpan and Benjamin Percy have inserted Flamingo make me think he could be working for someone important.

Now, I really like Nightwing #49’s ending. We learn how all-knowing Cimialcinnus, the Celtic God of Paths (being in charge of the Pathway Altar) really is. Percy also gives us some direction, but really doesn’t commit as to what will happen next.

Nightwing #49 has a great tempo. The whole racing theme may have played a part in it, but I really think it has to with Percy writing Nightwing the perfect amount of internal monologue. Sometimes Nightwing can talk to himself just a tad too much. The next issue will probably go in the opposite direction with the situation only becoming more complex.

(Make sure you check out our Batman #55 review to figure out how that ties in with Nightwing #50!)