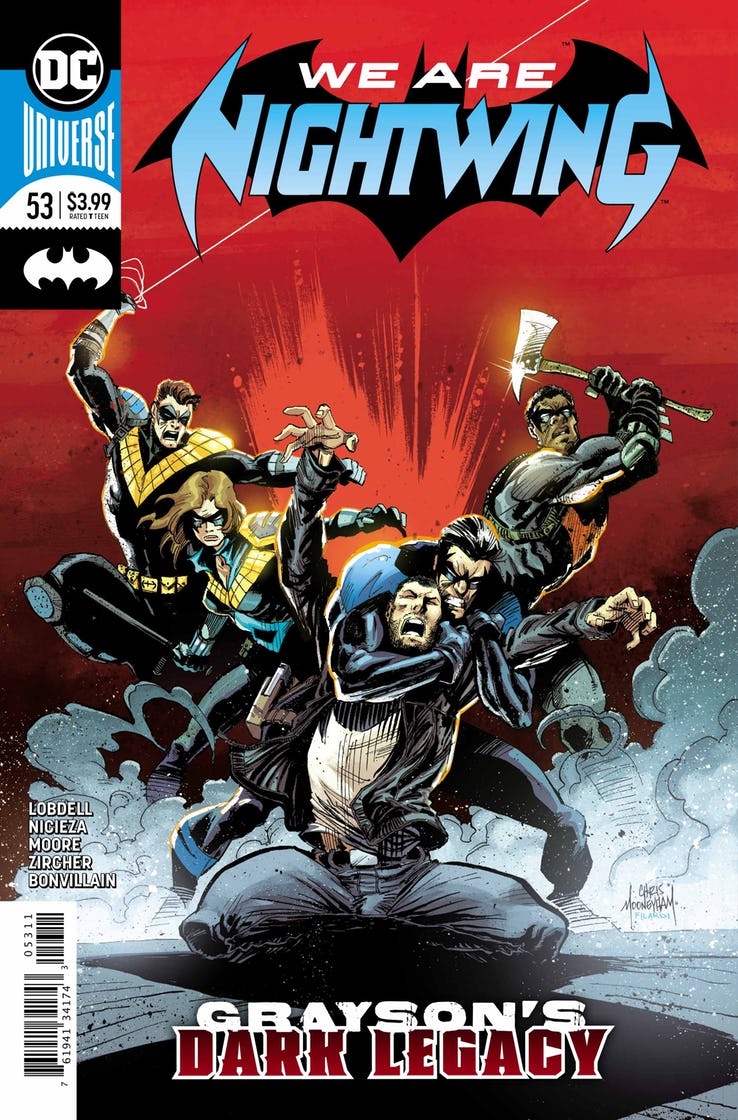 The biggest thing that stood out from Nightwing #53 is it feels like Ric Grayson is starting to mesh with Dick Grayson. I’m not saying he’s fully reverting back to his old self, by no means is that the case. But certain distinguishing characteristics have popped up.

Take the lame lines for example. The first one came in his internal monologue, when he says, “I don’t give a bat’s butt.” It’s not corny necessarily, but I’m really, really glad he didn’t say it out loud. We get it. You worked with Batman, but don’t care to be associated with him anymore.

Then there’s his conversation with Burl in the hospital when they’re discussing Nightwing. Ric says, “I heard Nightwing was young. And much hotter.” Much better than the previous quote, and it was actually pretty funny.

Speaking of Burl, Ric went above and beyond to save him. As much as the new Nightwing did all the fighting, Burl doesn’t escape that mess without his fellow cabbie. I don’t think the Ric from Nightwing #50 would’ve done the same.

Another thing, Grayson helped out his friend, or at least fellow bar-goer, Tiny, who broke his sobriety. All he did was provide a little encouragement after Tiny broke the bad news, to which Tiny responded, “Have you always known just the right thing to say?” Yes, Tiny, he has.

Set everything else aside, his compassion has always been one of the characteristics that have separated Nightwing (the real one) from the other DC heroes. Certainly one of his defining qualities. It may not be realistic to maintain that as he becomes more of a badass, but if there are writers capable of combining the two effectively, Scott Lobdell certainly one of them.

One last thing on the actual Nightwing: looks like he found someone special in Bea the bartender. She could play a huge role in Ric’s future, too. Not in the marriage-sense, necessarily, more so in the fact that she’s not going to bring up his past as Dick Grayson.

For those hoping he’ll go back to his old ways, you better hope Bea steps out of the picture quickly. Because as long as she’s here Dick is never coming back.

Regarding the new Nightwing, Alphonse Sapienza, that guy is going to get himself killed. He may get help from the other “Nightwings” now that he’s set an example, but he can’t hang like Grayson did. He’s clearly very reliant on his guns and doesn’t bring much else to the table. Or at least, he’s not remotely close to the level of the real Nightwing.

He’s in big trouble, too. Bea might be for that matter, too. Because it looks like Scarecrow is back, and the foreshadowing in Nightwing #50 insinuates he’s hunting Nightwing. Though Ric might be able to avoid the fight if he chooses to, something says he won’t in the end.