Ric Grayson’s mixed messages continued in Nightwing #56 and show no signs of stopping going forward. Try as he might to not be Dick Grayson, this guy just can’t help himself.

While it may feel like Ric will revert back to Dick, Nightwing #56 confirms that won’t be the case. For the foreseeable future, Dick Grayson is no more and Nightwing is a title Detective Alphonse Sapenzia and company will represent.

Ric isn’t staying out of the fight entirely, though. Once officer Zak Edwards ate a full round of bullets, Ric’s old self forced him into the action—but on Ric’s terms. Which wasn’t much different from the way Dick handled things. Where everyone else was trying 100 percent to half what Ric does, he only had to give 50 percent to bring order to the chaos.

Whatever Ric turns into under his new unnamed mantle should be fun, but Sapenzia is not fond of it in the slightest. His jealousy jumped off the page the second Ric got involved. The Nightwings vs. the real Nightwing should make for an interesting storyline.

There’s just one thing Ric needs to do in the course of things: invest in a mask. Smokey eye does not work for him. He’s made a career of hiding behind a tiny, strapless mask, but this is ridiculous. How does Scarecrow not figure out who he is in two seconds? He just saw Ric a few days ago. Crane also thought Ric was one of the most impressive patients he’s ever had. On top of that, Ric wasn’t affected by the fear gas. Only one person has been able to survive that. Scarecrow should really be able to put two and two together. I mean, it only took him two seconds to realize Sapenzia wasn’t the real Nightwing.

All in all, it’s good to see some level of promise from Ric as a crime fighter. 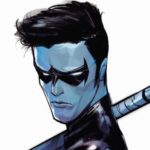