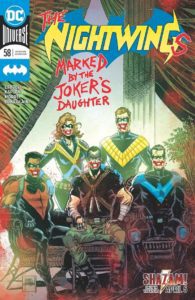 Nightwing #58 is a slight bump in the road for Ric Grayson and the Nightwings. They still saved the day in their battle against Joker’s Daughter, but the story itself didn’t offer much.

The main problem right now is with the four Nightwings. Why do we care about them? Outside of being three cops and a firefighter, what else about them is interesting? The biggest dud of the group is Zak Edwards, who might leave the Nightwings. Good. He brings nothing to the table outside of being the brother to the team’s only interesting member, Colleen. Malcolm Hutch has some potential with that ax, too, but this is about Ric Grayson still, right?

If Scott Lobdell and Zack Kaplan plan to develop any of the Nightwings it should be Colleen. She has an edge to her. Seems like there might be more to her story. Maybe spend time on Alphonse Sapienza, as well, but not necessarily for the same reasons.

Ric isn’t completely ignored throughout all of Nightwing #58. In fact, he once again plays the hero. Throughout his internal monologue, Ric reinforces his acceptance of the fact he likes to help others. It’s specific to Dick Grayson or Ric, it’s just part of what makes him, him. He can’t change that.

What he can change is the manner in which he helps others. Even then, Ric is still doing much of what Dick used to do. He can knock Sap and the other Nightwings for dressing up and wearing masks all he wants, but is smearing his face with grease that much different?

Nightwing #58 ends with Ric picking up Barbara Gordon on her way to the airport. The conversation they have and Ric’s facial expressions giving the feeling there’s something more to what’s said. That at the teaser for the next issue being “Old Flames” could have multiple meanings.