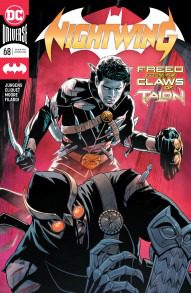 (WARNING: Spoilers for Nightwing #68 ahead.)

We’re almost there. At least, it feels like we’re almost at the end of the Ric Grayson run. And the end isn’t coming soon enough.

While it’s great to see Nightwing take another step toward his older self, the manner in which he was able to do so in Nightwing #68 is where there’s an issue.

So, the Court of Owls went through extensive work to ensure Ric didn’t revert back to his old self after he was shot in the head. Then they made these goggles, which gave Talon greater control over Ric. Awesome, cool plan and concept. The goggles portion isn’t anything crazy, but they work.

But how were the goggles so easy to break? And how is it that when the goggles break, Ric slingshots in the other direction and gets almost all of his Dick/Robin/Nightwing memories back? Seems like a fatal flaw in what seemed like a fairly well thought out plan — from the Court of Owls, which is a group of fairly smart individuals.

All that being said, there’s still some legitimate uncertainty when it comes to Ric’s future. Dan Jurgens can go in whatever direction he wants. That detail and the artwork from Travis Moore and Ronan Cliquet are the best parts of the issue.