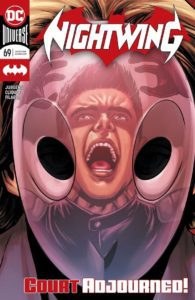 It’s pretty apparent by now this title has become very touch and go since Dick Grayson’s personality shift to Ric Grayson. But now that Dan Jurgens has made clear both Ric’s memory loss and distaste toward anything Nightwing and Batman-related are part of a bigger plan developed by the Court of Owls, this entire story has taken on a new vibe.

Nightwing has momentum, and that carries into Nightwing #69. Especially because just when it seemed like the story was moving in one direction, Jurgens decided to call an audible.

Also, all-around, Ronan Cliquet’s artwork was impressive, but his action sequences eye-catching. And there’s also something subtle he’s done with Grayson. Same goes for Andworld Design, too — though that detail became more obvious later in Nightwing #69.

(WARNING: Spoilers for Nightwing #69 ahead.)

One thing too look for in Nightwing #70 is what does Ric’s hair looks like.

Well, when he first took on the new persona, you may remember Ric had a buzz cut. His hair has slowly grown back in time. Of course, that’s natural. And why would Ric want to keep his hair so short when he has a scar from a bullet, right?

Still, if you look at the last few issues — excluding when he wore Talon’s glasses — Ric was starting to act more like his old self, even though he still refused to go by either of his old names. With that, Ric’s slick hair has grown back. Now, again, maybe Ric wanted to grow it back. But it seems hard to imagine there wasn’t a reason for this decision by Cliquet.

The other reason this theory seems plausible, look at what happened to Grayson’s narrative boxes after he was brainwashed again in Nightwing #69. The boxes went back to the style from when Dick first became Ric. It’s a slightly more obvious decision, but along the same lines as what Cliquet did with Grayson’s hair — which is a small detail that says a lot.