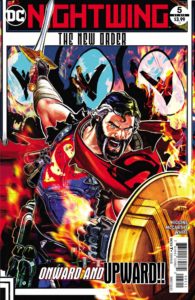 Nightwing, Starfire, and the Titans find Jake and work together to save him from the Crusaders. Then, we finally find out what tragedy pushed Dick Grayson to take every meta’s powers away.

The penultimate issue of this Elseworlds mini-series reveals what sent Nightwing over the edge, and I have some thoughts. Without spoiling the moment too much, though it should be obvious, the event that leads to this alternate universe should have been a shocking moment, but the way it was explained to readers felt like a throwaway moment. After escaping Crusaders headquarters with Jake, the Titans take him and his reluctant father to Metropolis. There, Superman gives an unprovoked history lesson and motivation explanation. Him and a former adversary casually reveal what would be a tension-filled tragic moment in any other comic book, but in The New Order feels more like something everyone but Nightwing and somewhat Superman has moved on from. Obviously, Clark is going over the complexity of Dick’s decision to restrain meta’s powers, but a reveal like that could have been so much more.

In an earlier review, I went over what made Marvel’s controversial event Secret Empire, such a weak story. Not just the lack of delving into the mind of a hero turned fascist, but also the quick turnaround from Bad Cap to Good Captain America. The New Order has turned out to be the antithesis of Secret Empire. Focusing solely on the consequences of the heroes actions. Though the explanation for the turn seemed a tad rushed through, it was a legitimate reason for Dick Grayson to do what he did. And even with his son and former love Starfire back with him, he still feels like he’s doing the right thing. He feels he needs to save this world from itself, and he’s not budging from that, even in this issue. 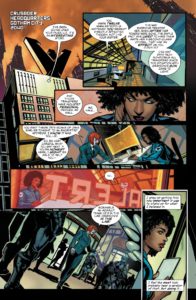 Trevor McCarthy has done a phenomenal job on this series but really had a chance to shine in this fifth issue. Showing a grizzled and powerless Superman, Blue Lantern Lois Lane maxing out her power, and Jake going full Starfire was great. The art team including Dean White and Clayton Cowles have done a great job of making The New Order have a larger than life look to it. This is a big-time event comic book, unfortunately without all the promotion and conversation to go with it.

I have no clue what’s to come in the final issue. There is no easy way out of this and that is fantastic. Kyle Higgins does a fantastic job of making readers come at classic heroes from a different perspective. Though I wasn’t happy with some of its execution, this was still a very strong issue and has me excited for the next.

Elseworlds Nightwing Nightwing: The New Order Superman titans
Are you an Insider?News, reviews, & updates are just the beginning.