This issue did not take it’s time it dives straight into the craziness that has become of Nash’s life. She wakes up with a grotesque display of words that someone has splattered on her wall. Upon calling the police, the investigator realizes it’s biblical. He asked her if she has a stalker and realizing there was no break-in. Who has the code to get into her house? Only a few she really trusts. What does this mean? The texts she’s always received from THEMANCOMESAROUND  have become darker, much darker. Even the detective recognized her as the girl with the sex tape. I would lose my mind. Is she?

No. 1 With a Bullet begins to show other elements. She really doesn’t know who to trust anymore. In a morbid museum called “Museum of Death”, she meets with a client. At this point, I can’t tell if she’s losing her mind or the supernatural events that follow are real or involves her contact lens. Possibly the third. She meets a quite..interesting I’ll say; new character. Here’s where sh*t really explodes. Nash at this point thinks her mind is playing tricks on her or if it’s really happening. She learns a lesson about not assuming the things people read or write about are the truth. Realizing that’s the same situation she’s in. They’re very similar; her and this mystery woman. They both trusted the wrong man. 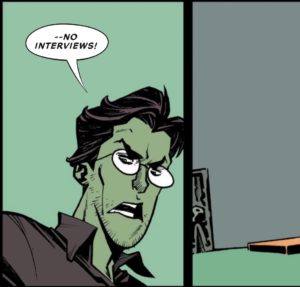 In Issue #3, we also start to see what all this is doing to Jad. There’s even some empathy. I don’t think he’s pulling the strings anymore on how he handles the situation. Sleazy PR people and lawyers are trying to save his career. It clears up a lot of questions I’ve had since Issue 1.

No. 1 With a Bullet has became one of my top 10 rankings in the titles I’ve read in 2017. Now sliding into 2018 with a bang. It’s confusing at times, but in the exact way, it needs to be. There has been no slow build up. Especially in this issue. It’s definitely holding nothing back. The art is amazing in a way that you can see Nash’s progression. The facial expressions are how I’d envision them during the struggles an escalation. The series is, of course, an exaggeration, but it’s most definitely fitting to real life in modern society. Cyberbullying and privacy invasion is a huge problem with things like social media and the fact that people can be taking pictures or video of you on their smartphone without your knowledge. Even just being in public. Since I’ve read this, I limited certain access my 16-year-old has on her phone. That’s how brutally up front this comic is. Paranoia levels escalate, however, how paranoid should we be?